Pope Francis seeks to liberate Virgin Mary from the ‘mafia’ 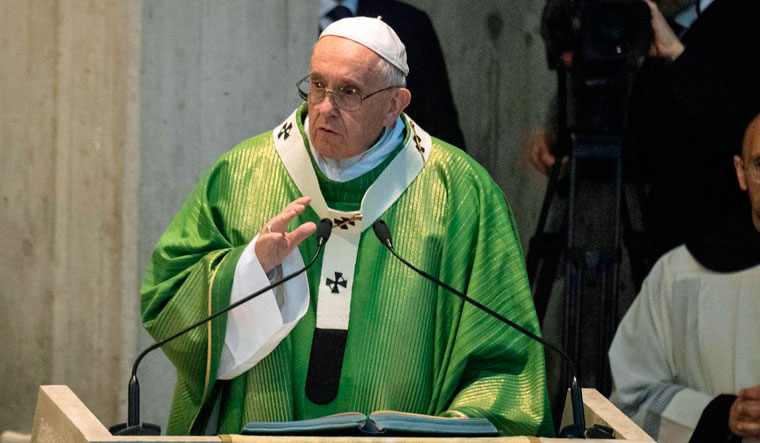 Pope Francis celebrates a mass at the Parish of San Crispino in the Labaro neighborhood of Rome, during a pastoral visit, on March 3, 2019 | AFP

The Vatican has launched a think-tank at an event called Liberating Mary from the Mafia. The move has been made to prevent mobsters from hijacking Catholic tradition to claim God is on their side. According to an AP report, Pope Francis is backing efforts to prevent the Mafia from using the image of the Virgin Mary for their criminal ends.

The think tank, that was appointed by Pontifical Marian Academy, was launched at ‘Liberating Mary from the Mafia’ conference on Friday.

The think tank consists of clergymen and law enforcement experts with knowledge in fighting organised crime.

While reading out a message at the conference, the Pope said that the religious and cultural image and patrimony of the Madonna “must be preserved in its original purity.”

Pope Francis said any popular displays of devotion to Mary must “conform to the message of the Gospel and the teachings of the church.”

In 1993, Pope John Paul II said that the Mafiosi should change their ways or face the wrath of God's final judgment.

The use of Virgin Mary’s image has been common thanks to the Catholic Church’s association with the mafia, partly thanks to them both opposed to Communism. According to The Organized Crime and Corruption Reporting Project, this has gone on unchecked in Italy recently.

Some Catholic priests who have opposed the mafia, have paid for it with their lives. While others have been questioned for allowing mobsters use churches to celebrate sacraments such as christenings, weddings, funerals and even religious processions. Churches are also known to have accepted donations from mafia organisations.

The 'Ndrangheta crime syndicate in southern Italy, is known to use a Catholic shrine to host its meetings, The Organized Crime and Corruption Reporting Project says.

Organised crime groups in Brazil and Mexico are also known to use Catholic symbolism for their own criminal ends.