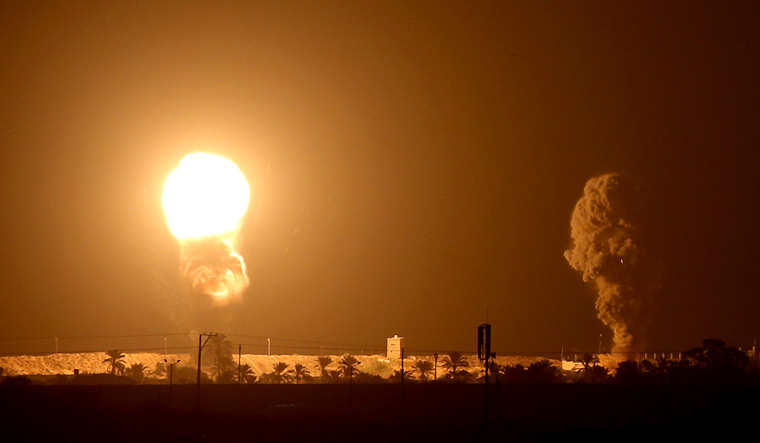 Israel bombed Gaza in the early hours of Wednesday. The attack took place just as Israeli PM Benjamin Netanyahu signed normalisation deals with the UAE and Bahrain in Washington. As per an AFP report, at least two rockets were fired from the Gaza Strip the previous evening, one of which was intercepted by Israel's anti-missile system. The other crashed into the southern coastal city of Ashdod and wounded two people.

Israeli warplanes fired missiles at a site in Beit Lahiya in the northern strip; Deir al-Balah, a city in central Gaza, as well as parts of Khan Younis in southern Gaza, according to Wafa, the official Palestinian news agency. Hamas, a group that governs the Gaza Strip said, "will pay the price for any aggression against our people or resistance sites and the response will be direct".

No casualties were reported.

Palestinian Islamic Jihad group in Gaza said the "resistance" fired rocket salvoes at Israel. Earlier on Wednesday, the Israeli army said that in response to rockets being fired to Israel, they carried out 10 airstrikes against positions belonging to Hamas.

The Palestinians are not happy about the US-brokered peace deal being implied by Israel. A deal, it feels did not include the Palestinians or respects their wish for an independent state. Palestinians in West Bank cities of Nablus and Hebron and Gaza came out to protest against the normalisation deals Netanyahu signed with UAE and Bahrain.

Protesters also marched in a demonstration in Ramallah, home of the Palestinian Authority (PA). Palestinian President Mahmoud Abbas warned that the deals would "not achieve peace in the region" until the US and Israel acknowledged his people's right to a state.

"Peace, security and stability will not be achieved in the region until the Israeli occupation ends," Abbas said.

According to the World Bank, the Gaza Strip has a population of two million, with more than half living in poverty.