Explainer: What is hybrid warfare and how has China used it? 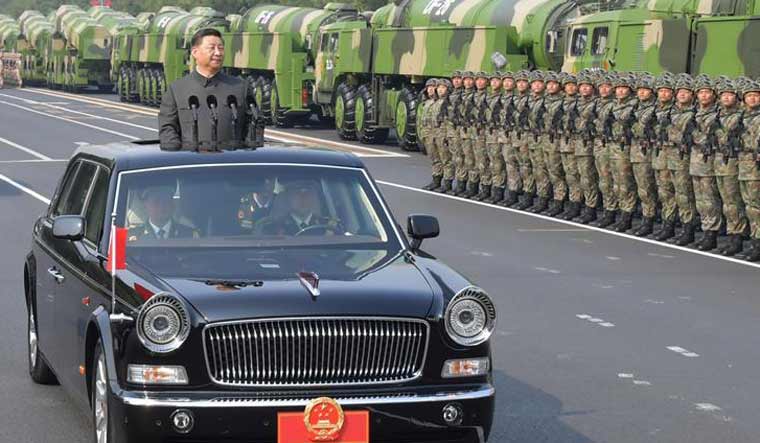 The supreme art of war is to subdue the enemy without fighting. This line from the Art of War—the renowned ancient treatise of Chinese general and strategist Sun Tzu—is, arguably, known to most people who follow conflicts.

Sun Tzu's philosophy is back in focus after The Indian Express and several publications across the world reported on Monday that a company linked to the Chinese government had been monitoring numerous leaders and organisations using big data. The Indian Express reported Zhenhua Data Information Technology was monitoring over 10,000 Indian individuals including Prime Minister Narendra Modi, armed forces officials, chief ministers and businessmen.

Explaining the methodology used by the company, The Indian Express reported "Zhenhua monitors the subject’s digital footprint across social media platforms, maintains an ‘information library’, which includes content not just from news sources, forums, but also from papers, patents, bidding documents, even positions of recruitment. Significantly, it builds a ‘relational database’, which records and describes associations between individuals, institutions and information.”

Zhenhua Data Information Technology, according to The Indian Express, had described itself as a pioneer in 'hybrid warfare'.

Not surprisingly, the news of the Chinese surveillance has put the spotlight on a seemingly complex methodology adopted by major powers, most notably Russia and China, in recent decades: Hybrid warfare. The term hybrid warfare has been in use since for about two decades and has been used interchangeably with "gray zone" operations and "irregular" warfare.

A report published by the US Center for Strategic and International Studies in August this year used the terms hybrid warfare/gray zone/irregular operations to refer to "any range of actions from non-violent economic manipulation to low levels of violence using mercenaries." The study also explained the vast scope of hybrid warfare, noting "it can also involve changes in deployment basing, advisory missions, arms transfers, or military exercises; claims to military zones; use of sanctions and trade barriers; economic warfare; technological competition; information warfare; support of other states and non-state actors and other forms of competition designed to gain strategic and tactical advantage..."

An earlier CSIS study, from May 2020, sought to define the main tools of hybrid warfare as:

1) Disinformation and misinformation operations: Emphasising the importance of information, CSIS noted, "competitors have honed their abilities to manipulate and weaponize information to wield power, gain influence, and counter allied narratives". It gave the example of Russian trolls and Chinese propaganda that are using social media to influence global audiences.

2) Political and economic coercion: While Russia is accused of using political coercion through the means of election interference, China has used "debt trap" diplomacy in countries participating in the Belt and Road Initiative to "shape their policies toward Chinese benefit and interests".

3) Cyber and space operations: CSIS noted, "Russia, China, and Iran have been actively launching major cyberattacks against allied and partner interests over the past decade, with targets ranging from banks and businesses to academic institutions and government agencies. Hybrid space operations include actions such as jamming GPS signals and transmitting fake GPS signals..."

4) Proxies and state-controlled forces: Purveyors of hybrid warfare have used proxy actors to conduct coercive operations "below the threshold of all-out war". CSIS noted China's use of "civilian" fishing boats operating in contested waters of the South China Sea as an example of such proxy forces.

A 2019 study by the US Center for Strategic and Budgetary Assessments (CSBA) argued, "Hybrid warfare has deep historical and cultural roots in China. Most elements of Beijing’s recent hybrid warfare operations have echoes in the guerrilla and insurgent campaigns conducted by the Chinese in the first half of the 20th century and even as far back as Sun Tzu in 500 BC."

The CSBA study noted China's hybrid warfare approach is directly backed by its ruling Communist Party and the military and warned it is always carried out with long-term goals in mind. "When the Chinese regime launches a hybrid warfare campaign against a major power, it usually prepares for a protracted struggle that is characterized by exceptional patience and persistence. In contrast to the Western practice of striving to win victories quickly and decisively, the Chinese frequently focus more on long-term positional advantage, avoiding defeat, and sustaining the campaign over a prolonged period," CSBA argued.

The CSBA study gave a chronology of China's use of hybrid warfare since the Communist party came to power in 1949. It  argued China used propaganda and other political warfare operations very early in Tibet before the PLA invaded it in 1950. "The Chinese regime intensified its political warfare operations in efforts to win the support of the Tibetan population, politically undermine the centres of local resistance, and reduce the need for a sustained military campaign," CSBA explained, adding that China abandoned all concessions it made to Tibetans after the first five years of its invasion. CSBA chronicled the similar use of hybrid warfare methodologies of disinformation and use of proxies by China in Southeast Asia and Vietnam and in recent years, the South China Sea.

Interestingly, CSBA argued the Doklam standoff of 2017 proved a disappointment for the Chinese hybrid warfare strategy. CSBA claimed India's deployment of troops to the Doklam plateau forced China to greatly increase "the intensity of their multi-mode political warfare campaign designed to sow dissent in Delhi and partner capitals, force an Indian withdrawal, and rally the Chinese public to the cause". “China’s diplomats and mass media communicated numerous warnings and threats and attempted to force the Indian Government to withdraw. These Chinese political warfare operations appeared designed to intimidate Delhi, generate divisions within the Indian Government, and foster tensions between Delhi and the capitals of India’s regional and global partners,” CSBA explained. There were murmurs of opposition to Indian influence in the Bhutanese media during the standoff at Doklam.

However, CSBA stated China's hybrid warfare strategy hit a roadblock as the Indian government was transparent about the troop deployments.

"India’s leadership released details of the Chinese operations to the international media and kept them regularly updated, which served as an effective counter to most elements of the Chinese political warfare campaign. Beijing had little success in sowing dissent in Delhi or undermining India’s international political and security relationships," CSBA stated.

However, the think tank noted China was not deterred by the setback in Doklam, explaining, "Beijing appears to have considered this operation to be merely the first phase of what could become a larger campaign in the future. " CSBA faulted the Indian government for not seeking concessions from China or seeking support of international institutions.

The ongoing standoff at Ladakh may well be an opportune time to revisit the findings of the CSBA study.