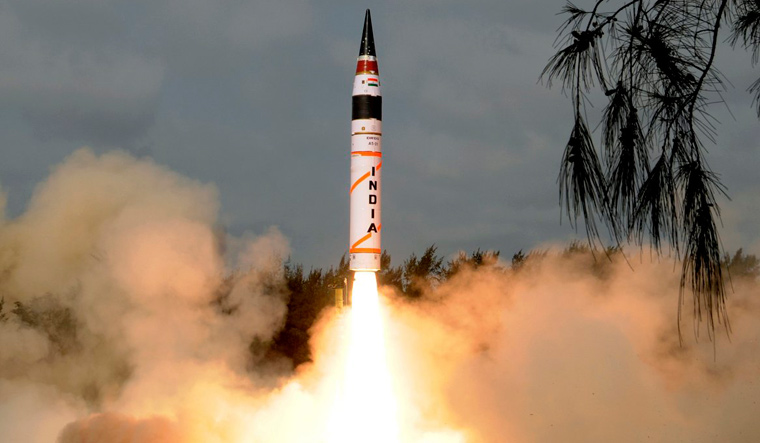 The continuing tension over the Line of Actual Control near Ladakh between India and China has shown few signs of abating. Both China and India maintain large numbers of troops and equipment in the region.

The Chinese state-run media continues to play up deployment of new artillery and other weapon systems near the border with India. However, despite the tension, references to nuclear weapons have been subdued in both nations.

A US think tank, the Carnegie Endowment for International Peace, on August 19 published a report on the Chinese perspective on nuclear weapons in the context of ties with India.

The Carnegies report noted while India's perspectives on nuclear weapons are "relatively well documented," China's views on the issue are largely unknown.

The Carnegie report is based on interviews with "dozen Chinese academics, researchers, and military officers who work either on South Asia or on nuclear policy" and review of Chinese literature published in the last decade.

While the interviews were conducted in 2019, prior to this year's standoff, the Carnegie report noted, "it seems unlikely that developments since the interviews would significantly alter the findings". The subject matter experts are kept anonymous in the report.

The Carnegie report reaffirms the perception that China does not see India as a strategic rival. "They see India mainly as a regional rival. The sense of superior power over India among Chinese officials and experts is long-standing and deep," the Carnegie report noted.

On the issue of conventional and nuclear weapons, “China is and will remain at least ten years ahead for the foreseeable future,” a Chinese military expert is quoted as saying. "A Chinese nuclear expert argued that India’s ‘small arsenal can deter, but there is a qualitative gap’ with China.”

The Chinese experts felt the focus of the country's nuclear modernisation efforts was on the US and to a lesser extent, Russia.

On the issue of India's nuclear weapons, the Chinese experts interviewed in the Carnegie report felt the systems are "for general deterrence and not for actual employment".

"Chinese experts tend to view both countries’ security strategies as defence-oriented. They believe India’s nuclear weapons programme is primarily driven by prestige and the pursuit of international status, not by an offensive military agenda. And they maintain a relatively relaxed attitude toward India’s growing nuclear capabilities, which ‘don’t add to deterrence versus China’. These attitudes persist even though India has deployed a nuclear-armed submarine, tested an anti-satellite missile, and reportedly begun developing a multiple warhead capability for its ballistic missiles," the Carnegie report noted.

The experts interviewed in the Carnegie study felt a border conflict between India and China was unlikely to escalate into a nuclear exchange. Both India and China have declared 'no first use' of nuclear weapons.

"...Chinese experts believe that certain bureaucratic and technical factors in India lower the risk of escalation. At the bureaucratic level, Chinese experts feel confident that India’s nuclear command and control authority rests firmly with civilian decisionmakers and that India’s political leaders clearly understand the imperative to avoid a nuclear conflict. At the technical level, the treacherous, high-altitude mountainous terrain would make it hard for a border conflict to escalate even to a large-scale, high-tempo conventional war," the Carnegie report observed.

However, the 'relaxed' sentiment was not uniformly shared. "In recent years, some Chinese experts have observed that India’s military strategy toward China is shifting to ‘fighting short high-intensity wars,’ which could increase escalation pressures in a more compressed timeline. The fog of war could become thicker if future high-intensity border conflicts involve interference or destruction of situational awareness capabilities early in the fight, making misperception, misunderstanding, and misjudgment more likely," the Carnegie report said.

A point of concern expressed by the Chinese analysts was the possibility of India and the US strengthening strategic ties.

"While Chinese analysts largely dismiss India’s homegrown development of new military capabilities, they express concern about the prospect of US-India collaboration on defence projects. Chinese experts are particularly wary of US-India missile defence cooperation and the possibility that it could create a networked system. If such a system was to emerge, they would see India as a de facto security ally of the United States," the Carnegie report noted.