In aftermath of Beirut blasts, how religious faultlines are coming to the fore 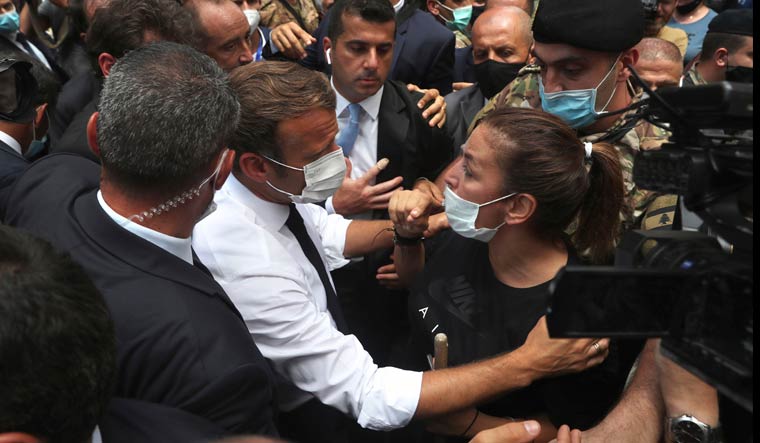 On Sunday, an online petition with more than 60,000 signatures circulated among the Lebanese communities and their diaspora, pushing for a return to the "French mandate" in the wake of the deadly Beirut blasts. "Lebanon’s officials have clearly shown a total inability to secure and manage the country. With a failing system, corruption, terrorism and militia, the country just reached its last breath. We believe Lebanon should go back under the French mandate in order to establish a clean and durable governance," according to the document.

Public anger had already been rising in Lebanon before the blast because of an unprecedented financial crisis in which the national currency lost 80 per cent of its value. Banks imposed informal capital controls in a controversial effort to control the collapse of the pound and foreign currency flight.

France and Lebanon have a very close history, going back to the colonial times. It reaches back at least to the 16th century, when the French monarchy negotiated with Ottoman rulers to protect Christians and secure influence in the region. By the time of the 1920-1946 French mandate, Lebanon already had a network of French schools and French speakers that survives to this day along with France's cozy relationships with Lebanon's power brokers.

In the aftermath of the blasts, French president Emmanuel Macron visited Lebanon, which was totally expected. The scope and nature of his visit was, however, one that raised eyebrows.

France's leader comforted distraught crowds, promised to rebuild the city, and claimed that the blast pierced France's own heart. "France will never let Lebanon go," Macron said. "The heart of the French people still beats to the pulse of Beirut." In a rare scene, the heads of Lebanon's political factions, some of them still bitter enemies from the 1975-1990 civil war, appeared together at the French embassy in Beirut, to meet Macron. News agency AP reported that Macron gathered the politicians as schoolchildren, reprimanding them for failing to carry out their duties.

His critics denounced the overtures as a neocolonialist foray, distracting his domestic audience from mounting problems at home. Memes circulating online dubbed him Macron Bonaparte, after the 21st century emperor and conqueror Napoleon Bonaparte.

In September 1920, post the breakup of the Ottoman Empire, the League of Nations had granted the mandate of Lebanon and Syria to France, who implemented a constitution based on the French Third Republic. In the Second World War, the country was occupied by the Nazi-fronted Vichy French government, later liberated by the Free French troops. Post-Independence, a tender powerbroking agreement was reached to between the Christian, aligned to the West, the Sunni, aligned to the Arab nations, and the Shia communities. There were power imbalances though, as the Christian community held the main levers of power, but the situation was shifting with the formation of Israel and the deluge of Palestinian refugees into Lebanon. The same religious faultlines played a major role in igniting the Lebanese civil war.

Throughout history, from culture to politics, there has been a strong imprint of France in Lebanon.

With the petition and this latest visit, there are fears of another growing chasm between the Christians, who embrace Macron, and other communities. While Macron was touring neighborhoods torn apart by the explosion, the health minister in the Hezbollah-backed government toured field hospitals donated by Iran and Russia, major power players in the region.

His actions even led to a domestic backlash. Macron's domestic political opponents, from the far left to the far right, warned the centrist leader against creeping neocolonialism, and extracting political concessions from Lebanon in exchange for aid. "Solidarity with Lebanon should be unconditional," tweeted Julien Bayou, head of the popular Greens party.

Macron himself firmly rejected the idea of reviving the French mandate. "You can't ask me to substitute for your leaders. It's not possible," he said. "There is no French solution." But he made a point of noting that he plans to return to Lebanon to verify that promised reforms are being undertaken on September 1, the 100th anniversary of the declaration of Greater Lebanon and the beginning of French rule.