After UAE, Saudi Arabia to use dogs to sniff out COVID-19 at airports 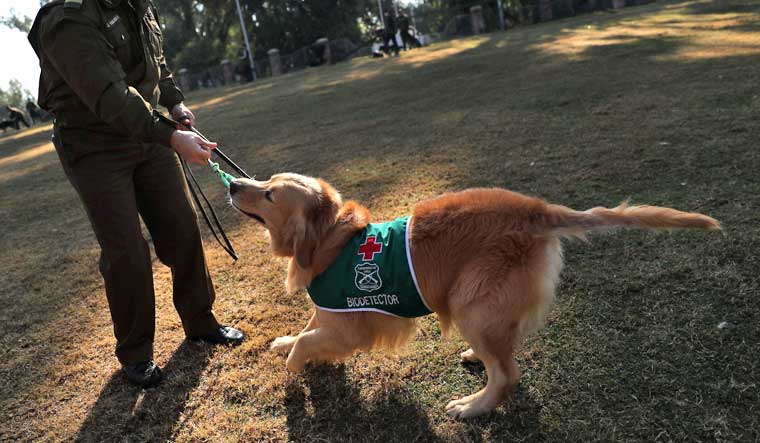 The role of sniffer dogs in airport security is a long and gloried one. Whether it is to detect bombs, bed bugs, drugs or even SIM cards, sniffer dogs have played a vital role in the line of defence at an airport.

Now, Saudi Arabia may follow suit after airports in the United Arab Emirates started deploying dogs that can sniff out the scent of coronavirus from infected passengers.

With international flights resuming in Saudi Arabia, the customs department has trained dogs—Jack Terriers as well as other breeds—to detect passengers that may be infected by the SARS-Cov-2 virus, Arab News reported.

The training has been done in collaboration with the country’s Centers for Disease Control and Prevention (CDC) and has been 80 per cent successful so far, Mohammed Al-Salloum, director of the National Center for Living Means at Saudi Customs, told Arab News, adding that final preparations were ongoing to start deploying dog teams across airports in the kingdom.

Likewise, the United Arab Emirates has already deployed sniffer dog squads at the Dubai International, becoming the first country to do so in the process. Samples taken from passengers are taken to another room where they are sniffed by dogs—with results being delivered in less than one minute according to the Dubai Police.

Numerous studies have shown that dogs are able to discern signs of coronavirus infection if trained to do so, being able to isolate the scent of infection from a patient’s sweat—even if they are otherwise asymptomatic.

With over 300 million scent receptors, compared to the six million found in humans, dogs are much more able to discern individual scents.

Both the UAE and KSA were home to millions of expatriate workers before the COVID-19 pandemic hit. A Saudi Labour Market Developments report by Jadwa Investment estimated that up to 1.2 million expat workers would leave the kingdom in 2020. Likewise, around 150,000 Indians had registered to leave the UAE on repatriation flights back to India as of June. The UAE alone is expected to shed 900,000 jobs and lose 10 per cent of its expats due to the COVID-19-induced exodus.

As some expats return, along with international passengers, both the UAE and KSA will need to protect against an influx of new COVID-19 cases. While Saudi Arabia had over 282,000 cases as of Wednesday, the UAE has over 61,000. Both countries have seen the number of daily new cases decline over time.

France too has been studying the efficacy of using sniffer dogs to detect COVID-19.

An international research team led by Dominique Grandjean, professor of the National veterinary School of Alofrt, has been studying the use of sniffer dogs in detecting COVID-19. The dogs were given both positive and negative samples from patients with and without COVID-19, and were reportedly able to distinguish between them with 100 per cent accuracy in some cases according to a proof of concept study published in Biorxiv. Trials conducted with the dogs had a 95 per cent success rate of detecting the virus.

The dogs used were experienced sniffer dogs that had been trained for four days in the new method, which involved placing wool soaked in sweat samples inside metal cones—so as to make sure the dogs had no contact with the infected material.

Although precautions are taken over fears that dogs too can spread the infection, so far, transmissions have only been seen from humans to animals as well as between animals.

Chile, the UK and Germany have also conducted trials to test the efficacy of sniffer dogs in detecting coronavirus.