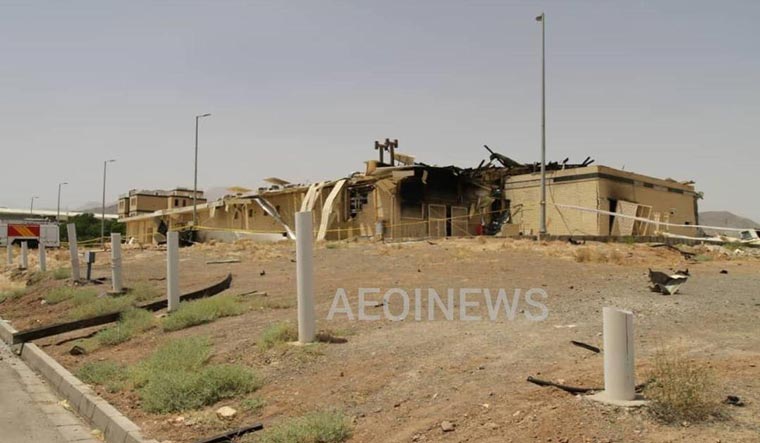 A fire and explosion took place at a building in Iran’s underground Natanz nuclear enrichment facility on Thursday, with US-based experts suspecting the blaze took place around 2am local time.

While officials at the Atomic Energy Organization of Iran initially maintained that the incident only affected an under-construction “shed”, US-based experts told the Associated Press that it occurred at a site believed to be a newly constructed centrifuge facility.

Data collected from the U.S. National Oceanic and Atmospheric Administration satellite suggests the flames from the incident were bright enough to be seen from space. In addition, the Institute for Science and International Security tweeted saying the location of the incident matched with what the nuclear non-proliferation non-profit had repoted as a new cetrifuge facility that was set up in 2018.

The site of the fire at the Natanz Enrichment Plant identified in an AEOI photo is the same building the Institute identified as centrifuge assembly workshop in 2017. See: https://t.co/8WPao3i3F5 pic.twitter.com/aw9q0vqTqo

The facility is located around 250 km south of Tehran, and is among the sites being monitored by the International Atomic Energy Agency following the 2015 (and now-defunct) nuclear deal.

An unverified group calling themselves the ‘Homeland Cheetahs’ also sent a statement to BBC Persian journalists claiming responsibility for an ‘attack’ on the Natanz nuclear site. The group described themselves as an"underground opposition within #Iran's security apparatus." The BBC said they were unable to verify their authenticity.

#BreakingNews
An unknown group calling itself "Homeland's panthers" claimed responsibility for "the attack on #Natanz nuclear site". In an statement sent to some of BBC Persian journalists, the group says they're an "underground opposition within #Iran's security apparatus"

Six days earlier, an explosion occurred at the Parchin military complex, which Iranian officials attributed to “leaking gas tanks”, while US analysts speaking to the New York Times said it took place near a missile production facility.

Spokesman for Iran Atomic Energy Organization (AEOI) Behrouz Kamalvandi later released a statement saying no damage had occurred to the centrifuge facility and no release of radiation had taken place.

The enrichment site has not interrupted its performance, “and the site continues to do so,” he said according to IRNA.

The Natanz facility is Iran’s main uranium enrichment plant, and has been targeted by saboteurs before. In 2010, uranium enrichment at Natanz was interrupted several times after a malware named ‘Stuxnet’ reportedly infected computers at the facility, triggering a shutdown and later prompting the AEOI head to resign.