Pakistan had blamed the attack on India 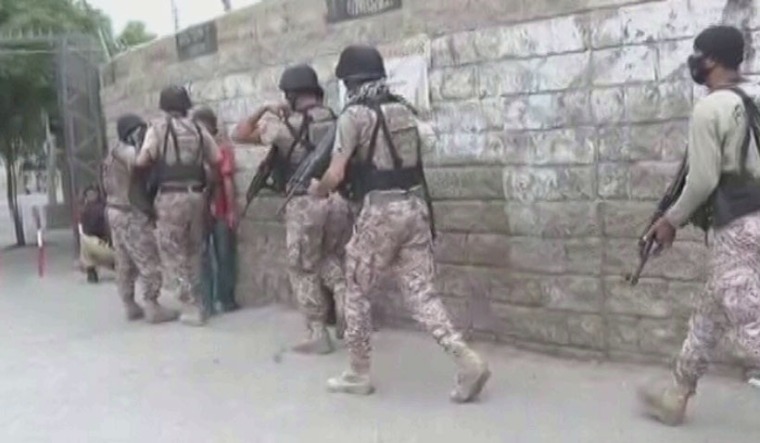 "Unlike Pakistan, India has no hesitation in condemning terrorism anywhere in the world, including in Karachi," said MEA spokesperson Anurag Srivastava. "Foreign Minister Qureshi may wish to reflect on this, as also his own government’s position, including his prime minister’s description of a global terrorist as a martyr."

Earlier this week, Pakistan Prime Minister Imran Khan had controversially referred to Osama Bin Laden as a martyr. His statement has been widely criticised.

Continuing the war-of-words, the Pakistan foreign ministry referred to the attack as "state-sponsored terrorism". "The comments made by the Indian Ministry of External Affairs (MEA) about the Karachi attack represent nothing but obfuscation and denial. India’s sophistry, however, cannot hide India’s complicity in acts of terrorism against Pakistan,'' a statement by the Pakistan foreign ministry read.

Relations between the two countries, already hostile, had further deteriorated after India asked Pakistan to reduce their staff strength in the high commission by 50 per cent, following the abduction and mistreatment of two officials. Pakistan folllowed suit the next day in a tit-for-tat move.

The Baloch Liberation Army (BLA) is believed to be behind the attack on Karachi Stock Exchange. The BLA has claimed responsibility for the suicide attack on Twitter, according to agency reports.

This is not the first time Pakistan has tried to suggest that India was behind the unrest in Balochistan. The Kulbhushan Jadhav case, fought in the International Court of Justice, was an attempt by Pakistan to link India to terrorism in the area.

The BLA had stepped up its activities in the past two months. In May, a landmine blast killed six Pakistan army soldiers, including an officer in southern Balochistan. The officer, Major Nadeem Abbas Bhatti, was targeted by the BLA, as being responsible for the “directly involved in the formation and leading of so-called death squads of criminal gangs operated by the army”, a BLA spokesperson has been quoted as saying.

The Karachi Stock Exchange blast, if the BLA is indeed behind it, was certainly conducted to get noticed. Formed in 2000, the BLA came into prominence, according to a study done by Stanford University, when it claimed responsibility for a bomb in a market in Quetta. Seven people were killed and 25 wounded in the attack.

The BLA has been held responsible for several attacks, according to Pakistani security agencies, including a suicide attack in August 2018 that targeted Chinese engineers in Balochistan; a November 2018 attack on the Chinese consulate in Karachi, and a May 2019 attack against a luxury hotel in Gwadar, Balochistan.

The BLA was proscribed by the US State Department in 2019 as Specially Designated Global Terrorists. The move to put the outfit in the terror list came on the eve of Prime Minister Imran Khan’s first visit to America. It was largely seen as a goodwill gesture to set the mood for President Donald Trump’s first meeting with Khan. America needed Pakistan, for its clout with the Taliban, to push the latter on to the negotiating table.