Protests against the killing of George Floyd intensified over the weekend 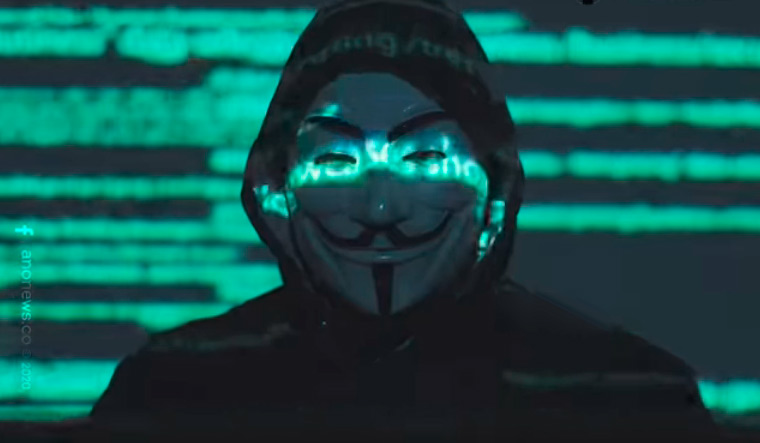 Screenshot from the video released by Anonymous on Facebook

As the United States reels from the aftermath of the death of George Floyd at the hands of the Minneapolis Police Department protests both violent and peaceful raged across the country. Though the officer deemed responsible has been arrested, protesters continued their calls for justice against his colleagues and for racial equality, as the demonstrations mounted in intensity and the #BlackLivesMatter hashtag resurfaced on social media.

Police, in turn, have increased their use of force and the National Guard have been deployed in at least 15 states, adding to the visuals of police-versus-protesters that have come to dominate American social media. Night-time curfews have been ordered in over a dozen cities.

Amid the chaos, a hacktivist that hadn’t been seen in years made a return: Anonymous. The decentralised hacktivist collective known for their operations against the Church of Scientology, ISIS and during the Arab Spring has seemingly re-emerged, issuing a video message to the Minneapolis Police Department.

In the video, released using the traditional imagery associated with Anonymous—a Guy Fawkes mask in the style of the film V for Vendetta and a distorted voice reading out the message—the outfit highlights the actions of the MPD and calls for the other officers involved in George Floyd’s arrest and subsequent death to face justice.

"This week’s brutal killing of George Floyd, which has sparked protests and national outrage, is just the tip of the iceberg in a long list of high profile cases of wrongful deaths at the hands of officers in your state," the message read.

In the message, Anonymous criticises the US police system and states that they do not trust the police to deliver justice. The message ends with the usual warning, “We are legion. Expect us.”

The message was followed by what was suspected to be a Distributed Denial of Service (DDOS) attack on the Minneapolis Police Website, which made access to the site intermittent and led to visitors being asked to verify they were humans and not bots—a sign that a DDOS attack took place.

In addition, a widely shared tweet claimed that the Chicago Police radio systems had been hijacked, with NWA's “F*** the police” and polka music being played through police radios in what is suspected to be a bid to prevent police from communicating about the protesters.

Another social media campaign linked with Anonymous, #OPDeathEaters, has resurfaced. Originally initiated years ago as an "independent, international, victim-led tribunal/inquiry into trafficking and paedo-sadist industry", the campaign re-released documents claiming to show President Trump's involvement in a child trafficking ring along with disgraced financier Jeffrey Epstein. It is not clear whether new documents have been leaked as many of these were seen two years ago. The contents of these documents have yet to be independently verified.

Since any group of hackers could band together to ostensibly represent Anonymous, there is no way to verify whether the groups' actions are carried out by the same group of hacktivists who were involved with the organisation before. The collective encourages anonymous participation in its efforts, with a Twitter handle claimed to be run by a few of its members releasing videos on digitally anonymising one’s presence and encouraging action against the Trump administration. Its relation to the alleged DDOS attack on the MPD website is only implied: A handle associated with the outfit retweeted the news of the site going down.

Given its loosely-held nature, people who have at some point or the other claimed to have been a part of Anonymous have hailed from across the political spectrum. The idea of Anonymous originated from the imageboard 4chan, a known haven of the alt-right and its varied ideologies, where users by default post under the name 'anonymous'.

The supposed re-emergence of Anonymous comes as anger against the Trump administration’s handling of the protests is mounting.

This is definitely getting out of control.

A NYPD police cruiser Rams & Pushes a metal barrier with protesters behind it, causing civilians to be knocked over like dominos.#GeorgeFloydpic.twitter.com/67Gx7tgckL

Amnesty International on Saturday urged the police to end their “excessive” militarized response to protests. A viral video showed two New York Police Department cruisers ramming through a crowd of protesters that had surrounded the vehicle—prompting further outrage. Reports of police firing on journalists emerged from across the country; a photojournalist, Linda Tirado, was left permanently blinded in one eye after she was hit by a rubber bullet while covering the Minneapolis protests.

Amid images of police brutality, scenes of looting have grown rampant. Department store chain Target announced that they were closing 175 of their stores across the US as many outlets fell victim to looters.

President Trump, who has condemned the violence, tweeted saying that far-left extremist group ‘Antifa’ would be designated a terrorist organisation. Antifa, regarded as a militant, left-wing, anti-fascist political activist movement in the US, comprises autonomous activist groups that aim to achieve their political objectives through the use of direct action rather than through policy reforms.

The Trump administration is blaming this far-left extremist group for the sudden spike in violent protests across the country after the brutal killing of George Floyd in Minneapolis.

The violence instigated and carried out by Antifa and other similar groups in connection with the rioting is domestic terrorism and will be treated accordingly, Attorney General William P. Barr said in a statement.

The Trump administration alleges that it appears the violence is planned, organized and driven by anarchistic and far-left extremists using Antifa-like tactics, many of whom travel from out of state to promote the violence.

The American Civil Liberties Union has questioned Trump’s ability to designate Antifa as a terror outfit, tweeting saying “There is no legal authority for designating a domestic group” and adding that any such designation would raise significant due process and First Amendment concerns.