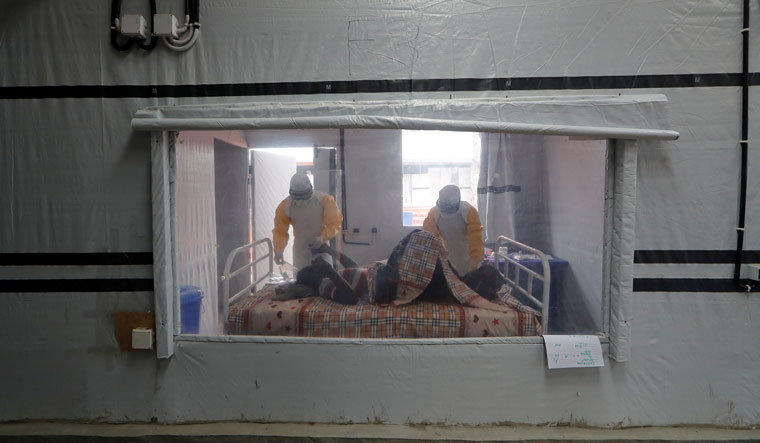 Moise Vaghemi, 33, (L) an Ebola survivor who works as a nurse cares for a patient who is suspected to be suffering from Ebola, inside the Biosecure Emergency Care Unit (CUBE) at the Ebola treatment centre in Katwa, near Butembo, in the Democratic Republic of Congo, October 3, 2019 | REUTERS/Zohra Bensemra/File Photo

The Democratic Republic of Congo has reported four deaths from Ebola in what is now the second outbreak in the country, with the new cases reported in the western Equateur province—the first time the province has reported Ebola cases since 2018.

DRC Health Minister Bobo Boloko Bolumbo confirmed that four people had died and that all the deaths analysed since May 18 were due to the Ebola virus.

“I ask the population to be calm and continue to respect hygiene measures. Regularly wash your hands with soap. Don’t say greet with your hands. Don’t touch ill or dead people who had a fever or bleeding,” he urged the public.

The new cases are reported in Equateur, while the existing clusters were identified in April nearly 1,000km away in the eastern regions of the country.

The World Health Organisation Director-General Tedros Adhanom Ghebreyesus also tweeted the developments, warning that COVID-19 was not the only health threat facing the world.

“A new #Ebola outbreak detected in western #DRC, near Mbandaka, Équateur province. @MinSanteRDC has identified 6 cases, of which 4 people have died. The country is also in final phase of battling Ebola in eastern DRC, #COVID19 & the world’s largest measles outbreak,” Tedros tweeted.

A new #Ebola outbreak detected in western #DRC, near Mbandaka, Équateur province. @MinSanteRDC has identified 6 cases, of which 4 people have died. The country is also in final phase of battling Ebola in eastern DRC, #COVID19 & the world’s largest measles outbreak.

The DRC has 611 cases of the novel coronavirus ands has suffered 20 deaths since the first case was reported in mid-March.

“WHO already has staff in Mbandaka, #DRC supporting the new #Ebola outbreak response. This outbreak is a reminder that #COVID19 is not the only health threat people face. WHO is continuing to monitor & respond to many health emergencies,” Tedros added.

The DRC and Uganda were the two countries hit by a renewed Ebola outbreak in 2018, two years since the Western African Ebola virus epidemic (2013-2016) had spread across West Africa, infecting 28,000 people worldwide and killing 11,323.

The 2018 outbreak, termed the Kivu Ebola epidemic, primarily affected the DRC and Uganda and is still ongoing. It has left over 2,200 people dead out of the over 3,800 people that have been infected.

By late 2019, a vaccine for Ebola, the rVSV-ZEBOV vaccine or ‘Ervebo’ received regulatory approval by the European Medicine Agency. In November, it received prequalification by the WHO, in what was by then the fastest vaccine prequalification process every conducted by the organisation.

The DRC is also battling an unprecedented Measles outbreak that began in early 2019 and that has infected over 341,000, killing over 6,400.