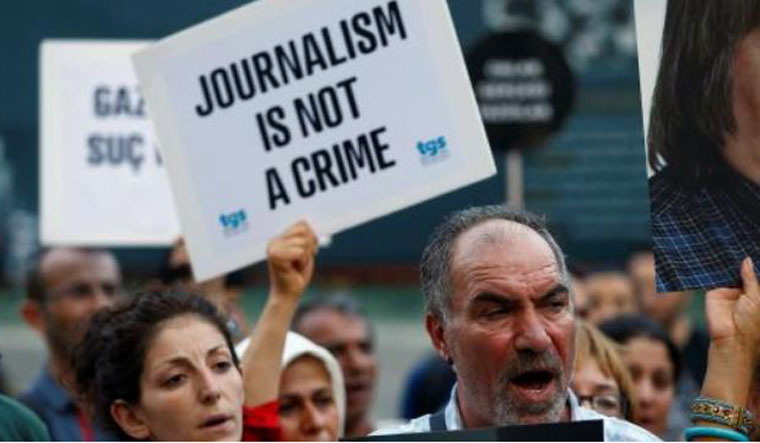 Two days after World Press Freedom Day was observed, a report commissioned by UNESCO has warned that curbs on the spread of fake information during the COVID-19 pandemic could result in legitimate journalism being threatened.

The UNESCO policy briefs, produced in collaboration with the International Center for Journalists (ICFJ) and by experts attached to the University of Sheffield’s Centre for Freedom of the Media, warned that fake news laws could undermine the freedom of expression and critical journalism designed to ensure that accurate information reaches the public and that governments are held to account for their management of the pandemic, read a release by the University of Sheffield.

"Instead, the researchers suggest incentives and empowerment measures to strengthen the role of independent news media to counter disinformation, as false rumours and conspiracy theories about the origins of and potential cures for Covid-19 spread online," the release said.

“Dr Julie Posetti and Professor Kalina Bontcheva’s two policy briefs on the ‘disinfodemic’ are calling on governments around the world to provide publicly-funded, no-strings-attached ‘rescue packages’ for independent journalism and news outlets to ensure the sustainability of journalism as a public good, as the pandemic adds to financial pressures on media organisations,” the release said.

“The UNESCO-commissioned reports also highlight the need for transparency from governments, recommending they release open data sources on rates of infection, mortality and recovery, and on issues such as equipment shortages. Such an approach would encourage public trust and support the work of fact-checkers, according to the experts.”

The first report attempts to identify common modes by which disinformation about COVID-19 is spread, and methods to combat them. “It has identified nine key themes and fourmain format types prevalent in disinformation about the COVID-19 crisis. These themes range from false information about the origins of the virus, and the incidence, symptoms and cures, through to political attacks on journalists. The formats in use include the familiar modes of: highly emotive narrative constructs and memes; fabricated, fraudulently altered, or decontexualised images and videos; disinformation infiltrators and orchestrated campaigns; and bogus websites, data sets and sources,” the report said.

The second report warned that heavy-handed responses to disinformation that "restrict freedom of expression rights, such as 'fake news' laws, could actually hobble the work of journalists and others engaged in vital research, investigation and storytelling about the pandemic, and the disinfodemic that helps fuel it."

“The mission-critical challenge is that if the news industry is unsustainable, a major force for identifying and exposing disinformation will be lost, leaving the field more open for the disinfodemic to spread,” the second report warned.

The report adds that internet companies could also extend programmes designed to compensate news publishers from revenues they make off their news content.

Fake news has multiplied during the COVID-19 pandemic, with WhatsApp rumours resulting in doctors being attacked and in misinformation about the virus and the response to it being circulated on a daily basis.

However, attempts to suppress the spread of information has also played a role in making the pandemic worse. China initially suppressed whistle-blowers who tried to highlight the scale of the threat early on in the outbreak; in Russia, doctors who highlight problems with the state’s response to the virus have been falling out of windows under mysterious circumstances.

The ICFJ recently held a panel on the difficulties journalists were facing in reporting from countries where media freedom was restricted.

The researchers urge social media and other internet communications companies to apply the lessons learned during the urgent response to the COVID-19 disinfodemic and apply them with the same level of urgency and thoroughness to political disinformation that threatens democracy internationally.

Dr Posetti and Professor Bontcheva were commissioned to produce the reports as part of the United Nations’ response to the coronavirus crisis, with the aim of helping the UN, governments, journalists, civil society and internet communications companies respond, while protecting freedom of expression rights in the process.