Venezuela says the cruise vessel was preparing to attack the country 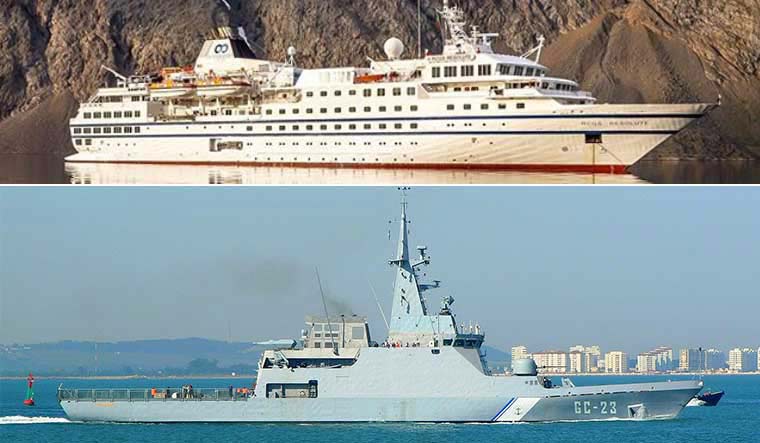 In a battle of brute strength between an 8,378-ton cruise liner and a 1,453-ton military patrol boat, who would you expect would survive in a head-on collision? The answer, unsurprisingly, is the larger ship.

Just after midnight on March, it was reported that a Venezuelan Navy patrol boat had rammed a German cruise liner off the Venezueluan coast after accusing the vessel of violating the country’s territorial waters. The ANBV Naiguatá attempted to ram the RCGS Resolute after firing shots at it. In the process, the Naiguatá suffered serious damage and sunk itself.

In a statement by Columbia Cruise Services, the German shipping liner said they had been drifting off the Venezuelan coast for over a day as they were dealing with engine problems. They said they were then subject to an “act of aggression” by the Venezuelan Navy in international waters.

“Shortly after mid-night, the cruise vessel was approached by an armed Venezuelan navy vessel, which via radio questioning the intentions of the RCGS RESOLUTE’s presence and gave the order to follow to Puerto Moreno on Isla De Margarita. As the RCGS RESOLUTE was sailing in international waters at that time, the Master wanted to reconfirm this particular request resulting into a serious deviation from the scheduled vessel’s route with the company DPA,” the company said.

The Resolute had no passengers onboard at the time, and was staffed by 35 crewmembers.

“While the Master was in contact with the head office, gun shots were fired and, shortly thereafter, the navy vessel approached the starboard side at speed with an angle of 135° and purposely collided with the RCGS RESOLUTE. The navy vessel continued to ram the starboard bow in an apparent attempt to turn the ship’s head towards Venezuelan territorial waters.”

“While the RCGS RESOLUTE sustained minor damages, not affecting vessel’s seaworthiness, it occurs that the navy vessel suffered severe damages while making contact with the ice-strengthened bulbous bow of the ice-class expedition cruise vessel RCGS RESOLUTE and started to take water.”

While the Naiguatá was a fully-armed military-grade vessel, the Resolute was built to survive trips to Antarctica and was of “Ice-class” standard. This made its hull far thicker and stronger than normal ships.

The Naiguatá, with 44 crew members, started to sink in full sight of the Resolute it had tried to ram. According to the shipping liner, the Resolute waited in the area for one hour asking an international maritime body, the Maritime Rescue Coordination Centre (MRCC) in Curaçao, if they should rescue the Venezuelan sailors. Attempts to contact the Venezueluan ship were left unanswered.

The MRCC advised the Resolute to resume passage, leaving the Venezuelan sailors to await rescue by another ship. The Resolute suffered “minor” damages from the incident while Venezuela lost a ship worth well over 100 million euros.

Venezuelan President Maduro accused the captain of the Resolute of “terrorism and piracy”. In addition, the Venezuelan Strategic Command Operations accused the ship of having fast-moving command boats that could execute “fast raids”. According to Venezuelan state-run news outlet VTV,

“The cruise ship RCGS Resolute, which attacked a Bolivarian Navy ship last Monday while patrolling northeast of La Tortuga Island, is equipped as evidenced by photographs published by the Strategic Operational Commander with inflatable boats capable of transporting up to seven commands to execute incursions in coastal areas.”

VTV cited Maduro as saying that the Resolute’s refusal to allow Curaçao authorities to access the ship “confirms the hypothesis that this ship was being used to bring mercenaries to our coasts and carrying out attacks on military units or political objectives”.

On March 26, the US charged Maduro with drug offences, offering a $15 million bounty for information leading to his arrest.