Signs that Italy’s nightmare is coming to an end, as the US braces for the worst 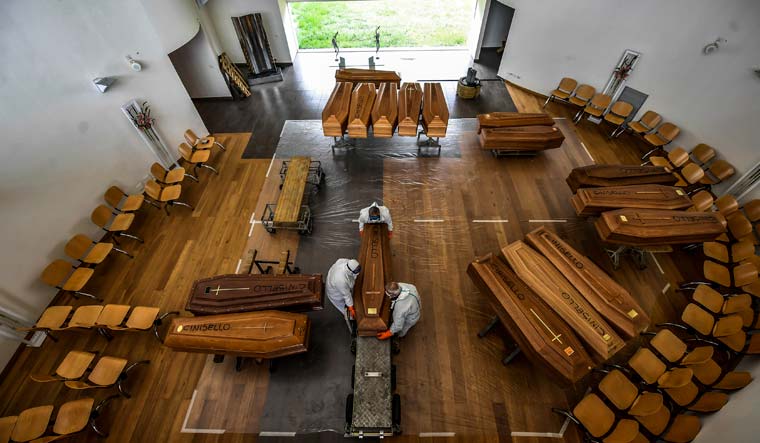 Coffins arriving from the Bergamo area, where the coronavirus infections caused many victims, are being unloaded from a military truck that transported them in the cemetery of Cinisello Balsamo, near Milan in Northern Italy, March 27, 2020 | Claudio Furlan/LaPresse via AP

The total number of coronavirus cases in Italy as of Monday had crossed 100,000 to reach 101,739, according to the Civil Protection Agency. However, the number of new cases has shown a steady decline for the fifth day in a row with 1,648 new cases on Monday—compared to 4,789 new cases being added on the corresponding day a week ago. There are now 75,528 active cases in Italy.

The strict lockdown on the entire country is scheduled to end on April 3, however, it may be extended accoridng to the minister for regional affairs.

As of Monday evening, there were over 740,000 cases worldwide, with the virus now having a presence in 183 countries and territories. The US has become the country with the most number of cases, at over 150,000. While over 2,600 people have died from the virus in the US so far, President Donald Trump has warned that the toll could reach 100,000—a figure he said would be a sign that his administration had done a “very good job”, citing models that estimated up to 2.2 million could die.

Trump said the country was expected to hit its peak in the number of infections by two weeks. On Monday, he ordered the countrywide shutdown to be extended for a month.

Monday saw Russia impose a lockdown on Moscow, making the capital the latest global city to have empty streets as a result of the virus outbreak. Over two-fifths of the world’s population now live under some form of confinement. Three world leaders, Benjamin Netanyahu, Angela Merkel and Justin Trudeau, have gone into self-isolation over fears that they might have contracted the virus. One leader, Boris Johnson, has already tested positive.