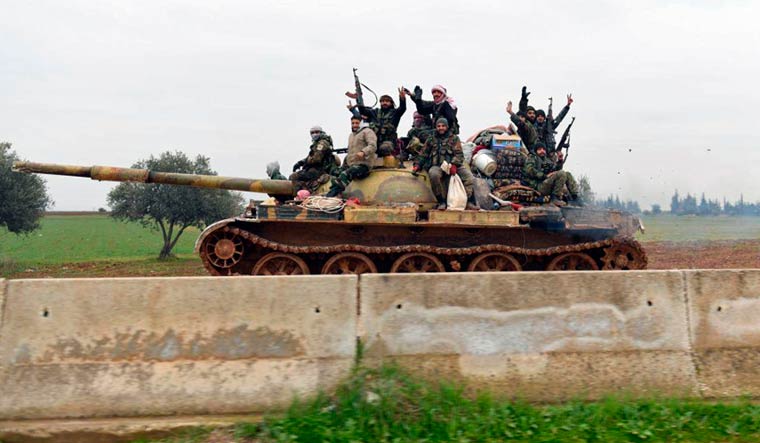 In this photo released Wednesday, Feb. 12, 2020, by the Syrian official news agency SANA, Syrian government soldiers on a tank hold up their rifles and flash victory signs, as they patrol the highway that links the capital Damascus with the northern city of Aleppo, Syria | SANA via AP

Ever since the Syrian Civil War began in 2011, the city of Aleppo has been one of its frontlines. The Battle of Aleppo lasted four years between 2012 and 2016. But, even though Syrian government forces officially prevailed in 2016 following a rebel withdrawal, fighting has continued in parts of the province that were held by rebels for many years since.

On Sunday, a major offensive by Russian warplanes and the Syrian army resulted in victory for the government, which seized back towns that had been taken over by Iranian-backed militias according to activists speaking to Reuters.

Russian planes launched airstrikes on multiple rebel-held regions including Anadan, with the government declaring victory later in the day. Earlier this week, Syrian forcesrecaptured the strategic M5 highway linking Aleppo to the city of Damascus.

According to pro-government news source Al-Masdar News, the Syrian Arab Army captured “the last remaining areas under jihadist control” in the city and its surrounded areas, after the capture of the Layramoun and Kafr Hamra sectors.

The report said that the Syrian Army took control of the Al-Zahra Association Quarter, which it called the main battlefield in Aleppo for most of the war. It also said that government forces took towns in the Anadan Plain including Hraytan, Babis and Anadan.

According to the UK-based Syrian Observatory for Human Rights, regime forces encircled major towns and villages around the northern countryside of Aleppo in a bid to completely secure their grip over the city. 88 areas were captured with ‘intensive firepower’ deployed against the rebels.

Aleppo is one of the oldest continually inhabited cities on earth, with evidence of human habitation present from as far back as the second millennium BC.

The SOHR also said that 7,000 soldiers, 2,100 trucks and military vehicles had entered Syria in the last 13 days, as Turkish forces strengthened their presence in the so-called ‘de-escalation’ zone in along the country’s border with Turkey.