Obese ISIS hate cleric arrested, taken to jail in back of pickup truck

Dubbed ‘Jabba the Jihadi’, his fatwas led to many deaths 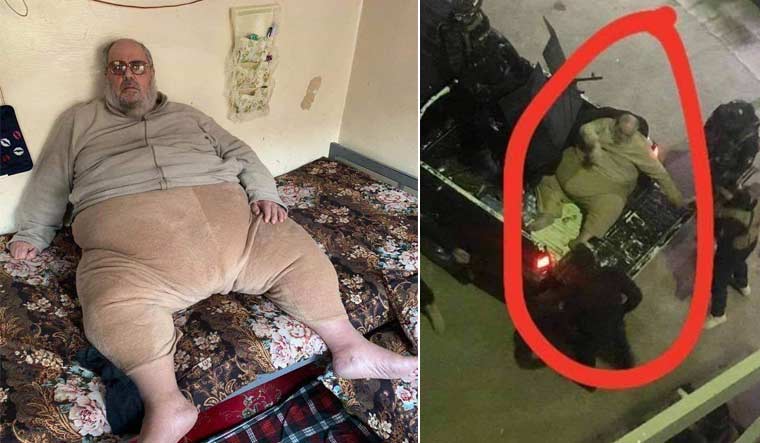 Images of a morbidly obese ISIS member being detained by police personnel have gone viral, after an Iraqi SWAT team on Thursday arrested a notorious cleric in Mosul, Iraq.

ISIS mufti Abu Abdul Bari, also known as a Shifa al-Nima, has been dubbed ‘Jabba the Jihadi’ on account of his massive weight—estimated at around 560 pounds (254 kg).

According to US military newspaper Stars and Stripes, citing a report by the Iraqi government’s security media cell, Bari was a hate preacher known for his “provocative speeches against the security forces” and was considered among the top leaders of “ISIS gangs”.

According to the Middle East Monitor, he advocated rape, torture, ethnic cleansing and enslavement.

He issued several fatwas over the course of his career, including those that ordered the execution of scholars and clerics who refused to pledge allegiance to ISIS when they occupied Mosul, as well as those ordering the destruction of heritage sites—such as that of a mosque built at the site of the burial place of the biblical prophet Jonah.

Locals told the JPost that they had terrible memories of Bari.

Bari’s arrest necessitated the use of a pickup truck, into the back of which he was placed. Images of him and his arrest were shared on Twitter by Ali Y. Baroodi, who says Bari used to give sermons in his neighbourhood.

Maajid Nawaaz, the founder of anti-Islamist-extremism group Quilliam, made a lengthy post on Bari’s horrific legacy.

“He was so overweight, maybe from remaining sedentary in his hiding place, that he had to be taken by police in the back of a pick up truck...Most religious justifications provided to ISIS for enslaving, raping, torturing, ethnic cleansing & massacring Iraqis, Syrians & others are from this paltry beast who can’t even stand on his own two legs.”

He added, “Do not underestimate the psychological blow the image of this obese monster being arrested is to ISIS. Gluttony is frowned upon by jihadists. But also, ISIS branded themselves as fighters possessing rare courage & discipline... meanwhile this walrus was their top religious cleric,” he added.

While Bari's arrest prompted a wave of jokes about his weight on social media, it was a sombre moment for Iraqi security forces, for whom this capture was that of a deadly criminal mastermind.

The battle against ISIS continues as the group may have lost its leadership and territory but remains active nonetheless. The increased tensions between the US and Iran after the killing of Qassem Soleimani prompted a drawback of US military operations. However, these have since been restarted as of January 16.