Russia to focus on growing economic partnerships in BRICS 2020 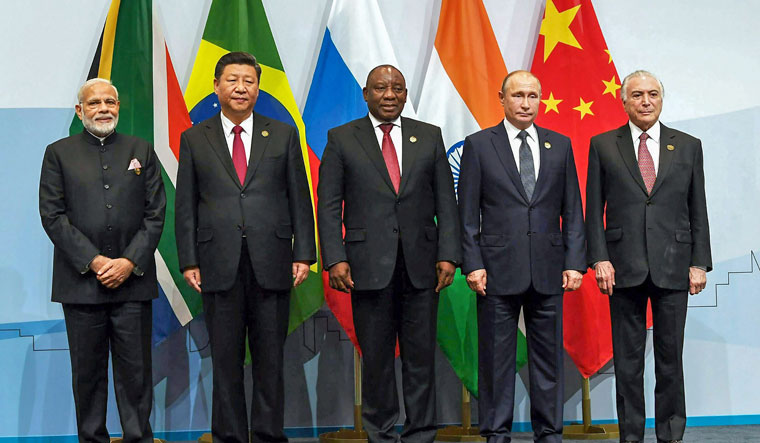 With Russia set to chair the five-nation grouping of BRICS (Brazil, Russia, India, China and South Asia) in 2020, the country has plans to hold events all year round in 16 of its important cities, under the overarching theme of BRICS strategic partnership for global stability, shared security and innovative growth, according to Victoria Panova, scientific supervisor of the BRICS Russia Organising Committee Expert Council.

Panova was in New Delhi to participate in the foreign policy conclave, Raisina Dialogue.

She said that priority would be given to economy, trade and investment, and this year, there would be an emphasis on renewing economic partnerships between member nations. All BRICS members are large countries in terms of geographic expanse, and Panova said that there would be sessions for exchange of best practices in rural and remote area management.

BRICS is a plurilateral grouping that was formed keeping the United Nations central to its ideology. It is also non-confrontational. It was formed as an alternative platform to old boys clubs like the United Nations Security Council and the G7, to ensure that the voice of the “rest of the world” was also heard.

Panova said it was heartening to note that while the G7—a group of countries which share same political, economic, cultural and global viewpoints—could not evolve into a dynamic grouping, apart from achieving some success in energy security (its main focus), BRICS, on the other hand, has evolved into a group that now makes decisions, instead of passively taking the decisions made by western powers.

Panova said that with 160 events of Track I and Track II diplomacy within BRICS scheduled this year, the latter encompassing events in areas of environment, cyber cooperation, academia and civil fora, the aim was to make BRICS more dynamic and comprehensive as its launched into its second decade of existence.

BRICS aside, Panova said that the India-Russia relationship was unique and had stayed stable for the last 70 years because it was mutually complementary and not directed against any other nation. Speaking about Russia's new closeness with Pakistan, which has had New Delhi in a flutter, she noted that both India and Russia were independent to make partnerships with other nations, and both have done that. These partnerships have not changed the Russia-India equation.

The reach-out to Pakistan, she said, was not against India, but to get better access to Afghanistan.