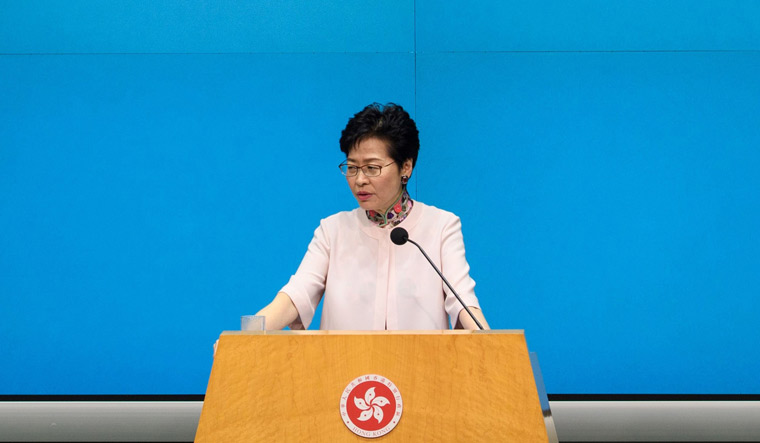 After almost eight months of protests, in a shocking statement of sorts, Hong Kong's Chief Executive Carrie Lam said that Hong Kong's autonomy under the 'one country two systems' framework could continue if loyalty to Beijing was upheld.

Lam's comments at the Legislative Council appeared to be an appeal to those in the city who see Beijing as tightening its control over the semi-autonomous territory's civic, economic and political life.

Though diminished considerably, Hong Kong has been wrecked by often violent anti-government protests since June. A landslide win of opposition pro-democracy candidates in the race for district councillors late last year caused the protests to diminish a bit.

Hong Kong, which was handed down from British to Chinese rule in 1997, was promised, that it would be able to maintain its own capitalist economy for 50 years. In fact, it is this system that has allowed the city to be developed into a financial hub, that has largely benefited China too.

Beijing routinely accuses political opponents in Hong Kong of seeking to split the territory from the mainland with the backing of foreign forces.

It isn't clear whether Lam was speaking in her own right or under an order or in coordination with Beijing. However, the statement had the feel of a final warning to the people of Hong Kong that they need to wear their loyalty to Beijing on their sleeves.

The proposed legislation that could have seen suspects extradited to the mainland to face trials that sparked these protests, was eventually scrapped. But, by then, it had turned into a pro-democracy movement as there was fear that Beijing was slowly seeking to curb personal freedoms. Protesters also called for universal suffrage.

While Lam has rejected those points, she said Thursday she hoped to announce next month the formation of a committee to look into the root causes of the unrest. Academics, experts and social leaders have been recruited to the Independent Review Committee, although some are reportedly reluctant to join out of fear of personal attacks or online harassment if their personal information is leaked by opponents.

Along with political concerns, the skyrocketing cost of housing and increased economic competition from mainland China is believed to have fuelled the protests.