The Yazidi community awaits return of their women & children, who are still missing 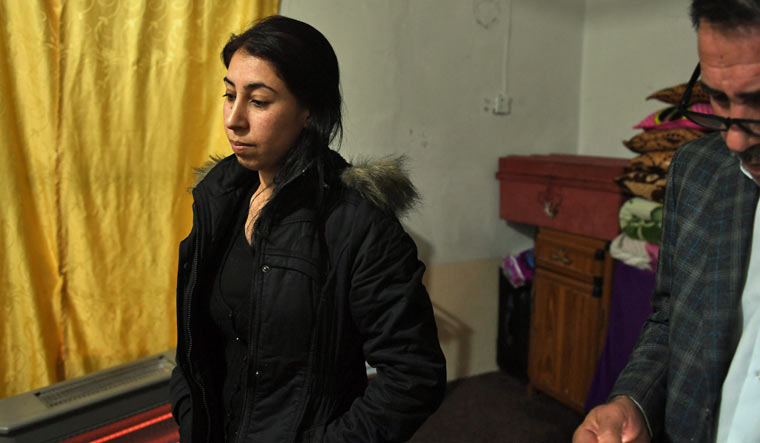 Forty seven kilometres from the beautiful city of Duhok, it is a picturesque drive to the foothills of Sinjar district. It is the northern region of Kurdistan guarded by Peshmerga, the military forces of the autonomous region of Kurdistan Iraq. In Kurdish, Peshmerga means ‘those who face death,’ and the word is heavy with historical importance. At dusk, an eerie silence mixed with a sense of foreboding prevails as the temperature plummets to four degrees. A few men are out on the road, near a municipality office, conversing with each other. Every day, the local municipality office in the foothills of Sinjar gets crowded as people wait for information on their loved ones.

A year after the fall of the Islamic State, the Yazidis in Kurdistan are still in the grip of fear. An uneasy stillness hangs in the air, as the road turns to the house of 27-year old Leyla Telo Khidher. Clad in blue jeans and a black t-shirt, Leyla is thin and pale. She doesn’t smile. Lines of sorrow run through her face. But her eyes are bright and fierce as those of the falcon. Determination to fight and win back life flow out, as Leyla begins narrating her miserable story of kidnap, rape and torture.

For two years and eight months, Leyla was enslaved by the ISIS fighters, sold eight times, raped, beaten and tortured. A year after getting back to her family, she is still waiting to hear if her husband Marwan is alive. Though she knows that chances are bleak, Leyla still expects him to return one day. Her seven-year-old son, who once used to draw only guns and say that those who don’t follow Islam should be killed, now goes to school, normalcy returning slowly to his life.

Born in a family of farmers and shepherds, Leyla, a mother of two fell prey in the hands of ISIS fighters, when the deadly Islamic State men, captured Mount Sinjar. As a child, Leyla who was living with her brothers and her sisters in Mount Sinjar and working on her family farm. After a spate of sheep theft, the family decided to move to Kojo, a village in the foothills of Mount Sinjar. In 2003, her brothers joined the Peshmerga forces after the US-led invasion of Iraq. Leyla and her brothers were happy and lived a peaceful life. Leyla was always happy as a child and even after her marriage, her life was peaceful.

But it all changed in 2014 when the ISIS came to attack Siba Shiekheder, the Yazidi town on the Syrian border. On August 2, 2014, some of Leyla's family friends from Siba Sheikheder called on her brothers for. This was also the time when Peshmerga fled from Kojo. The family did not know was clueless and so with some of the other villagers, Leyla and her family decided to flee the place, as they thought ISIS might come to Kojo also. The other shocker came in when Leyla’s sister who was living in Siba Sheikheder called, on August 3, 2014, to say that ISIS was coming.” Leyla and her family decided to go towards the North of Sinjar, leaving back one of their old uncles at home.

When they wanted to come back to Kojo the next day, ISIS had already reached there. So, Leyla, her husband and two children had no option but to be where they were. “We ended up in scrubland on the outskirts of Sinjar. There was no way out for us.” Leyla was very nervous. Her children— son Salar and daughter Sara, were crying non-stop. By then ISIS had already taken over. They asked the people for their money, jewellery and whatever valuables they had. A man with a red face and red beard, called Emir, which means Prince in Arabic, instructed his men in black to take away everything the Yazidis had with them.

Soon Leyla and her family were made to board a van and taken to an office where ID cards are usually made. When Leyla reached there, her husband was taken away. Before her, there were more than 1000s of Yazidi women and girl children all shivering in fear. Women and girls were picked up by numbers and names by the ISIS fighters at gunpoint. At dusk, the remaining women and children were crammed into a small space in the building. At around 9 pm, the ISIS fighters came in again. This time with a lantern to look at the faces of the Yazidi women. When a fighter came near her, she fainted and so she escaped that night. The next day again, when the ISIS men came, she cuddled to protect herself. But all in vain. She was taken away by a fighter and was transported to a school, a makeshift prison in Tel Afar, 50 km from Sinjar.

She was again kept in a cramped room with other women, where there was just a ray of light. Every time, the men in black with guns would come, pick beautiful girls and go. Each time, the names and ages of the girls in the room was made into a list. One day, an ISIS fighter picked her and her children. They were taken 200kms away from Tel Afar, into Iraq. She was then made to sit in a market place in Iraq only to be sold to a man called Muhammed in Mosul. Leyla seeing Muhammed had a sigh of relief thinking that he would save her because he was known to her family. “He was our family friend. But he did not show any courtesy,” recalls Leyla.

Three days later he took her to the market place in Raqqa, the then de-facto ISIS capital. In the market, as the merchants walk down, the women were made to sit with dirty clothes with a price fixed for each of them. Leyla was sold by Muhammed to another man in Raqqa. “It was the month of Ramadan. I was forced to go on fast. I would do all the household work, fast, only to be tortured and harassed by my captor,” recalls Leyla. She recounts the days when she was forced to convert to Islam. A month later, this man again sold Leyla to a doctor. When Leyla asked him to sell him back to her family and that she would get him money as much as he wanted, he refused. This time she was sold to a cosmetic surgeon. “I was with this doctor separated from my kids, in the same apartment, for six months. Everyday she would wash the clothes of her children, change their clothes and leave them in a room. His name was Abdallah Al-Hashemi,” recounts Leyla. She was constantly beaten and raped by the doctor captor.

This was also the time when her son was sent to an IS school and to the nearby police stations and made to watch videos of beheading and guns. After his return, he would say, “I will slaughter you,” looking at his uncle and other men who did not follow Islam.

“My son is eight now. But I have undergone the most difficult times even after we were rescued. My son would only draw pictures of guns, he will call all of us, including my brothers and Yazidis as infidels. He would say Islam is right. He is changing slowly now,” tells Leyla, as rays of sorrow run through her face.

After eight months with the doctor, Leyla was sold again and again, to men from Iraq, Lebanon and Saudi Arabia. Leyla who was at the first instance given as a gift to a fighter was later sold to each man and the price varied. And when Abu Hani, a Lebanese came, he said, he would marry her as he did not want to do anything Haram. It was a religious marriage at an Islamic State Court. It was then she tried to find a way to reach her family. In Raqqa, she came in touch with another woman, who helped her by giving her access to a phone. She reached her brother over the phone, who got in touch with a smuggler, who smuggled her out for a ransom, in April 2017.

Leyla gets nightmares even now. She has not slept peacefully and she waits for information about Marwan. “I don’t know if he is alive or dead. But I want him to come home alive,” she says. Leyla, like other Yazidi women, doesn’t want to cover her face as she narrates her horror story. “I want to help other Yazidis who have been affected like me. I want to be an inspiration to them, to fight all odds in life,” tells Leyla.

Like Leyla, when ISIS attacked Sinjar, more than one lakh Yazidis fled the place to save themselves. And those could not flee the place were rounded up. Many Yazidi men were massacred, while the women and children were captured. Many men were thrown into pits, many died of dehydration, torture and harassment. According to the Sheikh, at the Mala Ezidiyan Li Herema Centre in Hasakh, that works to rescue Yazidi women and children captured by ISIS, at least 6,383 Yazidi women and children were enslaved by ISIS, transported to their prisons, military training camps and forced to convert to Islam.

The Yazidis are a majority Kurdish speaking people who live in Mount Sinjar bordering Syria and Kurdistan Iraq in Northern Iraq. With a population of just one million people across the globe. Considered to be infidels by the Muslims, they have always been forced to convert. The Yazidis worship fire and their temple Lalish, 47 kilometres from Duhok, is almost similar to the Hindu temples. They participate in baptism and feasts. They sing hymns and narrate stories of historical and mythical battles like the Hindus. Visiting sacred places is considered as a religious practice.

Muslim rulers have always forced them to convert to Islam. When Saddam Hussein was ruling Iraq, the Yazidis faced displacement. It was then in 2003 when the US-led invasion took place, that Peshmerga was founded and many Yazidi men joined Peshmerga. But since then, there have been displacements and most Yazidis fled to Europe, Germany and many other neighbouring countries. Only 50,000 Yazidis live in Sinjar.

“The Yazidis are the most targeted in the whole of the Middle East. This is because we do not follow the Quran or Islam. We are the oldest religion in this part of the world with a 1400-year history. This is why we are targeted,” Sheikh told THE WEEK.

The attack on Yazidis began in 2014, according to him, as the geography of Sinjar is like a square and also because the Yazidis are not people who would fight back. “Between 2014 and 2019, our women and children were moved from Raqqa and Mosul like slaughter animals. Women above the age of 35 were made to work as servants. Girls between the age group of 15 to 20 were enslaved for sex. Many girls killed themselves. I remember how we heard the news of Jailan Bharjaz, who killed herself, fearing ISIS men.”

But Sheikh is determined to bring all the Yazidi women back home and reunite them with their family so that they can lead a peaceful life like Leyla Telo.