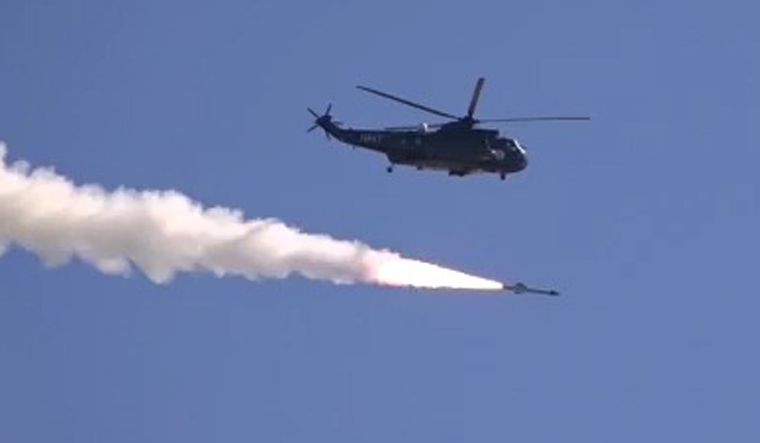 The Pakistan Navy announced on Friday that it had conducted multiple missile tests, including launches of weapons to hit targets on land from a submarine and a surface warship.

Radio Pakistan reported that the tests of anti-ship, land-attack and air defence missiles were conducted in the north Arabian Sea and the Makran coast in Baluchistan.

The Pakistan Navy also released a video of the tests, which were witnessed by its chief Zafar Mahmood Abbasi. Abbasi was quoted as saying the Pakistan Navy is "ready to defend the sea frontiers and would give a befitting response to any misadventure".

Footage from the video shows a Pakistan Navy Sea King helicopter, obtained from the UK, launching what appears to be an Exocet anti-ship missile, which was purchased from France.

The video from the Pakistan Navy shows the PNS Dehshat, an Azmat class fast attack craft, launching a missile, followed by a clip of the missile impacting a target on land. It is difficult to verify whether it is the same weapon launched from the PNS Dehshat.

The Azmat class of fast attack craft are small 500-tonne vessels designed and built with Chinese assistance. While they were originally meant to carry Chinese-built anti-ship missiles, since 2017, the Pakistan Navy has tested an indigenous cruise missile from Azmat class ships at least twice. The indigenous cruise missile is believed to be the Harbah, which is thought to have a range of 700km and can be used for anti-ship and land-attack missions.

The video clip also shows the launch of an unidentified missile from a Pakistan Navy submarine. The Pakistan Navy currently uses only French-designed submarines, which can fire Exocet missiles. In 2017 and 2018, Pakistan claimed to have tested submarine-launched versions of its Babur missile.