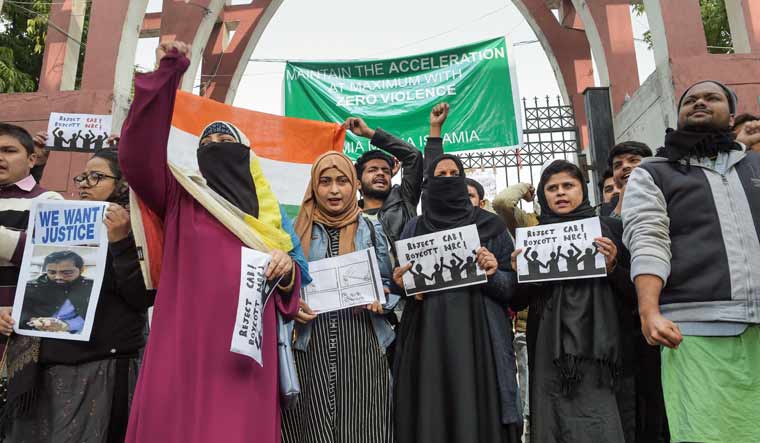 Protestors, including students and local residents, hold placards during a demonstration against the Citizenship Amendment Act (CAA), outside Jamia Millia Islamia University in New Delhi | PTI

Last week, the Indian parliament passed the CAB or the Citizenship amendment bill, citing the harassment of minorities in Pakistan, Bangladesh, and Afghanistan.

The law offered citizenship rights to Hindu, Buddhist, Christian, Parsi and Jain communities migrating from these countries, but excluded Muslims from the provision, triggering mass protests across the country.

The Hindu community in Pakistan has rejected the country's offer to grant them citizenship under the new law.

“This is a unanimous message from Pakistan’s entire Hindu community to Indian Prime Minister (Narendra) Modi. A true Hindu will never support this legislation,” said Raja Asar Manglani, patron of the Pakistan Hindu Council. He also said that the law has violated India’s constitution.

“The Modi government continues to curb and undermine the rights of minorities in accordance with Hindutva supremacist ideology,” Foreign Minister Shah Mahmood Qureshi said in a series of tweets on Monday.

Pakistan PM Imran Khan on Tuesday said that a big refugee crisis is looming in South Asia due passage of the CAB by the Narendra Modi-led Indian government.

Besides this, three Hindu lawmakers from Pakistan, on Friday, slammed the Citizenship Amendment Bill and said that the NDA government should not "drag" the Hindu minorities across the border into the controversy for its political advantage.

Lal Chand Malhi, member of the national assembly from Pakistan's serving party Tehreek-e-Insaf said that Amit Shah is projecting that CAB is the only lifeline for minorities in Pakistan, Bangladesh and Afghanistan and that Hindus are a proud minority in Pakistan to make their country better.

Sachanand Lakhwani, member of the provincial assembly of Sindh said that by dragging Pakistan's Hindus into the issue, India has interfered in our internal matters.