2 dead, several injured in shooting at US naval air base in Florida 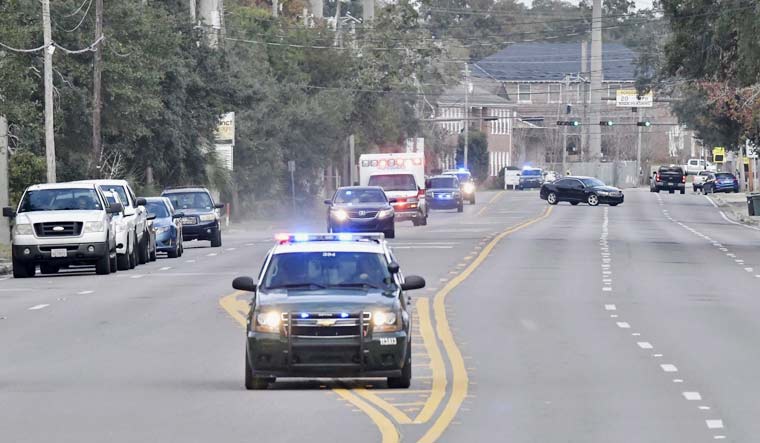 Police cars escort an ambulance after a shooter opened fire inside the Pensacola Air Base, Friday, Dec. 6, 2019 in Pensacola, Florida | AP

Just days after a gunman opened fire at a Pearl Harbor military base, another shooting, has taken place in a US military installation, this time at the Naval Air Station Pensacola in Warrington, Florida.

The shooter opened fire killing at least two people and wounding three, two critically according to the Pensacola News Journal. The shooter was confirmed dead at 7:48am by the Escambia County Sheriff's Office.

According to Navy Hospital officials, there may be additional injuries.

"Multiple injured personnel have been transported to local hospitals. We will continue to work closely with law enforcement agencies," Navy spokeswoman Lt. Commander Megan Isaac said in a statement.

The NAS Pensacola was put on lockdown as a result of the incident.

White House press secretary Judd Deere said President Donald Trump had been briefed on the shooting and was monitoring the situation.

According to local news station WEAR ABC 3, the shooting began at 6.30am.

This is the second shooting at a US military installation in two days. On Wednesday, a gunman opened fire at the Pearl Harbor Naval Shipyard in Hawaii, killing three Department of Defence personnel.

IAF chief, R.K.S. Bhadauria was present at an air force base in Pearl Harbor at the time of the incident, which was not near the naval base where the shooting took place.

NAS Pensacola, known as the “cradle of naval aviation”, is home to over 16,000 military personnel and over 7,000 civilians.

It is an early training centre for naval pilots, and is known as the "cradle of Naval aviation."

Earlier instances of shootings in US military bases in include a July 2015 incident, where Mohammad Youssuf Abdulazeez attacked two military installations in Tennessee, killing five. The FBI later concluded that he was inspired by a "foreign terrorist group."

In 2013, the Washington Navy Yard shooting took place, where Aaron Alexis killed 12 and wounded eight before being shot dead. This was the second-deadliest mass murder on a US military base after the 2009 Fort Hood shooting, when a "lone wolf" who supported Al Qaeda killed 13 and wounded over 30 at Fort Hood, Texas. The shooter, Major Nidal Hasan, was a US Army psychiatrist. He was critically injured in the gun battle and was later sentenced to death.