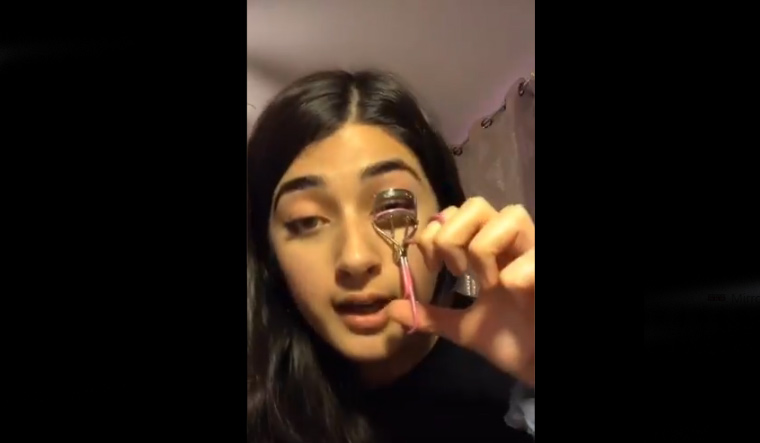 Feroza Aziz, a TikTok user who posted a fake makeup tutorial where she called for awareness to be raised on China's treatment of the Uighurs | Screenshot of the video via Twitter

Chinese-owned social media app TikTok on Thursday apologised to an Afghan-American user for removing a viral video she had uploaded that sought to spread awareness of China’s treatment of Uighurs.

The girl, an Afghan-American 17-year-old named Feroza Aziz, had uploaded a video purporting to be a makeup tutorial for curling one’s eyelashes. However, shortly into the video, she begins to speak about the treatment being meted out to Uighurs in China’s Xinjiang district, where over a million are believed to be held in mass detention camps that many say are concentration camps.

“People who go into these concentration camps don’t come out alive. This is another Holocaust, and yet nobody is talking about it. Please be aware and please spread awareness,” she says in the now-viral clip.

GUYS NO JOKE THIS TUTORIAL HELPED ME SO MUCH PLEASE WATCH IT pic.twitter.com/BuITSebOu6

However, the video was taken down on Thursday with Aziz taking to Twitter to say that her video had been taken down. In addition, she had earlier tweeted that she had been blocked from posting on TikTok for a month. Following widespread condemnation, TikTok, a subsidiary of Chinese developer ByteDance, restored the video and issued a public apology.

TikTok said they had accidentally removed the video due to “human moderation error” and restored it as well as her account. In a statement released by TikTok US head of Safety Eric Han, the company said that Aziz had earlier been banned for uploading a video featuring Osama Bin Laden‘s image, which is prohibited by the app’s terms and conditions on terror-related material.

They said that on November 27, “due to a human moderation error, the viral video from November 23 was removed. It’s important to clarify that nothing in our Community Guidelines precludes content such as this video, and it should not have been removed” adding that a senior member of the team identified the error within 50 minutes and reinstated the video. The statement then included a personal apology to Aziz.

However, Aziz says she is not convinced by their apology, tweeting that “This isn’t the first time tik tok has tried to silence me about the Uighur genocide. Here is the first video I made on my previous account that was deleted and taken down. Tik tok, I deserve answers. What are you trying to hide? I have reached out and haven’t gotten any answers.”

This isn’t the first time tik tok has tried to silence me about the Uyghur genocide. Here is the first video I made on my previous account that was deleted and taken down. Tik tok, I deserve answers. What are you trying to hide? I have reached out and haven’t gotten any answers. pic.twitter.com/7xEjkBRzv8

The Uighurs are a Muslim minority residing in China's northwestern Xinjiang province, who in recent years, have been rounded up into mass 're-education' camps that human rights activists say are concentration camps. Recently a leak of classified Chinese government material revealed how the Uighurs are surveilled, classified as risk to the Chinese state and then sent to the camps.