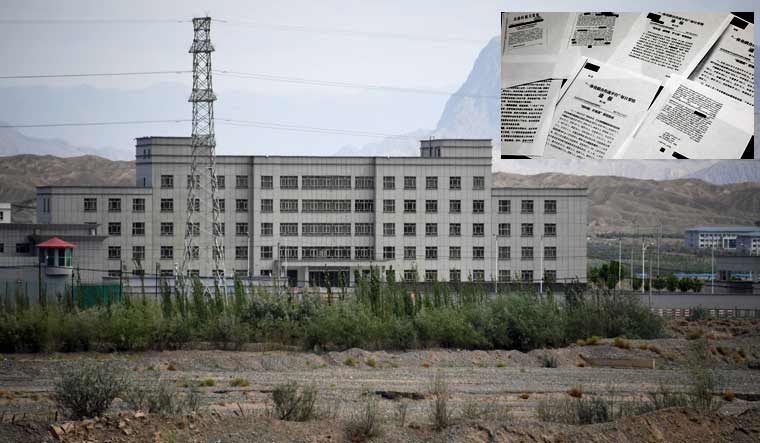 Documents obtained by the International Consortium of Investigative Journalists (ICIJ) and published by 17 media outlets worldwide on Sunday, show the strict protocols governing life in the camps in Xinjiang, where an estimated one million Uighurs and other mostly Muslim minorities are held.

In one document, local officials are told to monitor inmates at all times to prevent escape.

China has been maintaining that these camps are vocational training centres that have been set up to prevent terrorism and that the trainees take various courses at the education centres and their freedom is guaranteed.

The leaked documents however reveal that even the staff at the camps are banned from befriending inmates and engaging in "personal interactions" to prevent "collusion", the document read.

"It shatters (the Chinese Communist Party's) CCP's narrative about these camps as benign vocational training centres where Uighurs and other Chinese Muslim(s) willingly undertake training," said James Leibold, an expert on ethnic relations in China and a professor at Melbourne's La Trobe University.

Thousands of terrorist incidents have taken in Xinjiang between 1990s and 2016, in which thousands of innocent people got killed. There has been enormous uproar among the Xinjiang people for the government to take resolute measures to tackle this issue. And since these camps have been set up, not a single terrorist incident has taken place.

The documents with regards to these centres outline "in the Party's own words... the calculated, coercive, and extrajudicial nature of these detentions.”

The leak comes one week after The New York Times reported, based on more than 400 pages of internal papers it had obtained, that Chinese President Xi Jinping ordered officials to act with "absolutely no mercy" against separatism and extremism in a 2014 speech following a Uighur militant attack on a train station.

China initially denied existence of these centres. And has later acknowledged that it had opened "vocational education centres" in Xinjiang aimed at preventing extremism by teaching Mandarin and job skills.

Former detainees say that these indoctrination camps that are part of a campaign to eradicate Uighur culture and religion. According to Chinese officials, Xinjiang has become safer and its GDP has increased by 6 per cent after these camps were set up.

One of the document states that officials were ordered to keep strict secrecy about the "highly sensitive" centres, with staff forbidden from bringing mobile phones or cameras. The leaked documents lists guidelines security chief of Xinjiang approved in 2017 for running the 'educational centres'. It also includes intelligence briefings that show how police use data collection and artificial intelligence to select residents for detention.

"Students... may not contact the outside world apart from during prescribed activities," the memo reads, adding that staff should "strictly manage students requesting time off." If indeed the so-called students "really need to leave the training centre due to illness or other special circumstances, they must have someone specially accompany, monitor and control them."

the documents also states how the students must manage their day-to-day lives after they graduate and these include getting timely haircuts and shaves.

"There must be full video surveillance coverage of dormitories and classrooms free of blind spots, ensuring that guards on duty can monitor in real time, record things in detail, and report suspicious circumstances immediately," it adds.

In a bulleting that leaked in 2017, it was stated that 15,000 people from Xinjiang were set to 'education training' and 2000 placed under

According to a leaked bulletin from June 2017, more than 15,000 people in Xinjiang were sent to "education and training" because of IJOP, while around 2,000 were placed under "preventative surveillance." Even Xinjiang residents outside the country were subject to surveillance, the documents showed.

According to another bulletin from June 2017, the Chinese government recorded 1,535 individuals from Xinjiang with foreign nationality who had applied for Chinese visas.

Those "for whom suspected terrorism cannot be ruled out" and had cancelled their Chinese citizenship were to be deported, while those who had not were "first be placed into concentrated education and training", it said.

According to the memo, "students" must stay in detention for at least one year, though that is not always enforced, former inmates told ICIJ.