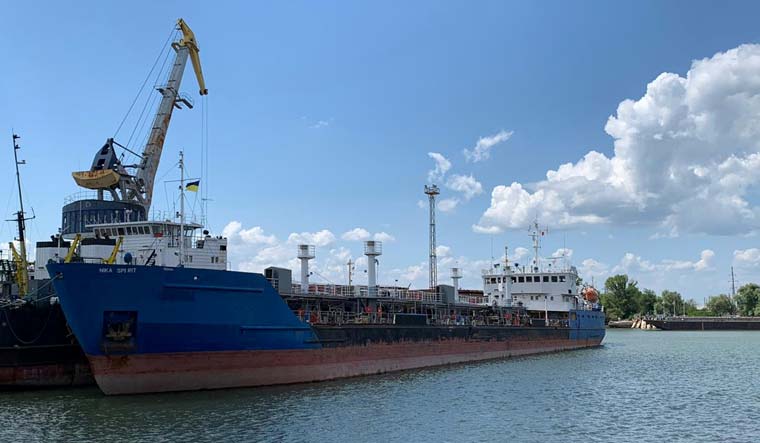 The Nika Spirit formerly named the Neyma, detained by Ukrainian security services in the port of Izmail, Ukraine in this handout picture | Via Reuters

On Thursday, Ukraine seized the Russian tanker Nika Spirit while it was passing through the port of Ismail, in retaliation against a November 2018 incident where the tanker was used by Russia to blockade and board three Ukrainian ships passing through the Kerch Strait near Crimea.

Ukrainian authorities released the ten sailors on board the vessel after Russia warned of "consequences", but have retained control over the ship, claiming that it was involved in a 2018 incident that saw three Ukrainian ships seized and 24 sailors detained by Russia.

On November 24, 2018, Russia blockaded, fired upon and boarded three Ukrainian vessels passing through the Kerch Strait. Russia claimed the vessels were in Russian territorial waters and that they did not follow protocols for passage through the Russian-controlled strait that connects to the Sea of Azov.

Ukraine says they followed all procedures, but that the region was considered shared territorial waters under a 2003 agreement. Russian forces boarded the ship by force, injuring three sailors in the process. The 24 sailors that were detained face up to six years in prison.

Ukraine declared martial law in response to the incident over fears of a looming invasion. US and Ukrainian officials have since tried to secure their release, but negotiations are still underway. These will likely be affected by the seizure of the Nika Spirit.

The ship, then named the Neyma, was allegedly renamed to Nika Spirit. A Ukrainian security service statement said, "An investigation has established that Russian owners changed the name of Neyma to Nika Spirit in order to hide its involvement in the illegal acts of aggression that took place on November 25, 2018." Ukrainian officials say the ship will be used as evidence in a criminal case.