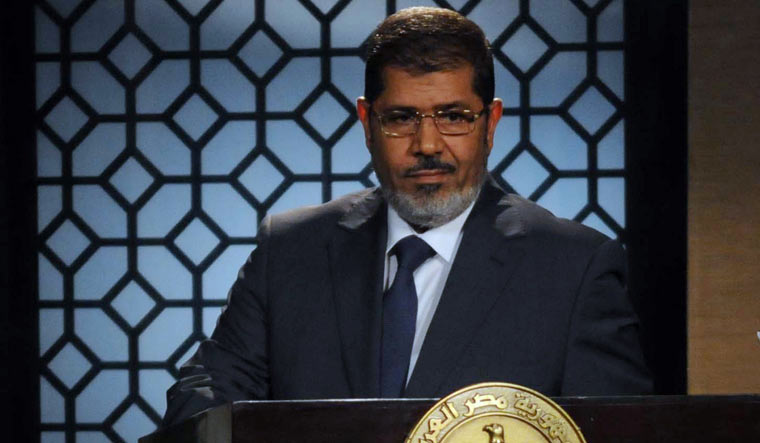 Former Egypt president Mohamed Morsi died on Monday in a hospital in Cairo after fainting in court. State TV said the cause of death was a heart attack. He was 67 years old.

Morsi, Egypt's first democratically elected president, was speaking before the judge from a soundproof glass cage, designed to prevent him from disrupting proceedings. He was on trial on charges of espionage. He collapsed while speaking and was taken to the hospital. Morsi was pronounced dead at 4.50 pm local time.

A top leader in the banned Muslim Brotherhood, Morsi was elected as president a year after the 2011 uprising, and was ousted in 2013 by the army. He has been in prison and on trial for cases including spying and plotting terror acts.

Morsi was sentenced to death in May 2015 for his role in jailbreaks during the uprising that ousted his predecessor, longtime autocrat Hosni Mubarak. He successfully appealed and was awaiting the final ruling of a retrial when he died.

The Muslim Brotherhood has called his death a “full fledged murder”.

Morsi's rule was marked by deep divisions in Egyptian society, a crippling economic crisis and often-deadly opposition protests. Millions took to the streets demanding his resignation after he made a string of decisions that benefitted the Brotherhood and issued a decree that shield his decisions from judicial review.

In the years following Morsi's ouster, President Abdel Fattah al-Sisi, who was the defense minister in Morsi's government, has targetted Morsi's supporters from the Muslim Brotherhood, imprisoning thousands. Egypt has seen a surge in bombings and shootings targeting security forces, particularly in the restive northern Sinai Peninsula, a stronghold of the Islamic State group.

Morsi's family had alleged last month that authorities were repeatedly denying access to him. The Islamist leader had a history of ill-health and they knew little about his state in prison, his family had said then.

Humans rights group Amnesty International said that Morsi was allowed only three visits from family during his time in prison, and was denied access to his doctors and lawyers. Activists have also said that Morsi was held in solitary confinement and not getting treatment for his health issues.