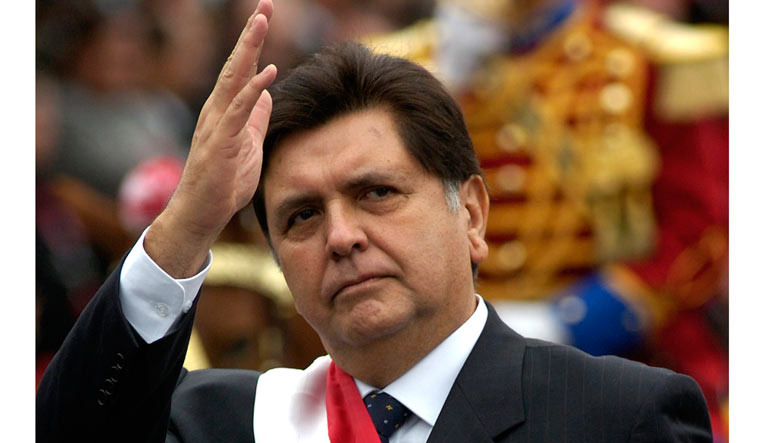 Peru's former president Alan Farcia shot himself in the head at his home in Lima as police were about to arrest him in a corruption case on Wednesday.

Garcia was taken to the Casimiro Ullao Emergency Hospital in Lima for an emergency surgery. He suffered a cardiac arrest and doctors resuscitated him three times before he succumbed to his bullet wounds.

The hospital confirmed that the 69-year-old suffered a “bullet wound to his head”. Oputside the hospital, Garcia's layer, Erasmo Reyna said that the former president took the regrettable decision to shoot himself.

Garcia was to be arrested at his home in Lima for money laundering. He allegedly took bribes from Brazilian construction company Odebrecht for offering large-scale public works contracts.

Garcia had said that there is “no statement, evidence or deposit that links me to any crime and even less so with the Odebrecht company or the execution of any of its projects”.

Odebrecht has admitted paying USD 29 million in bribes to Peruvian officials over three administrations. According to reports, some of the payment were allegedly made during Garcia's second term in office to build the Lima metro.

Reports also claimed that Garcia received a USD 100,000 payment from an illicit Odebrecht fund for giving a speech to Brazilian business leaders in Sao Paulo in May 2012.

“Dismayed by the demise of former president Alan Garcia. I send my condolences to his family and loved ones.”