Brexit: Theresa May offers to quit if MPs back withdrawal deal 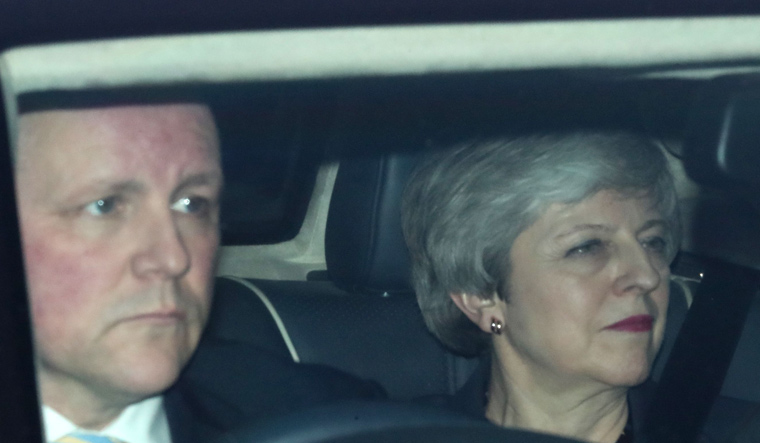 British Prime Minister Theresa May on Wednesday bowed to mounting pressure from within her own Conservative Party and offered to resign as PM if her MPs agreed to back her twice-defeated Brexit divorce bill to get it over the line in a third parliamentary vote.

The beleaguered PM told Conservative MPs in a private meeting of the influential 1922 Committee in London that while she did not want to leave the job before time, she was willing to make way for a new leader to take the Brexit negotiations through the next phase once the withdrawal agreement for an "orderly" exit from the European Union (EU) is ensured.

"I am prepared to leave this job earlier than I intended in order to do what is right for our country and our party," May told her party MPs, according to extracts of her speech released by Downing Street.

"I ask everyone in this room to back the deal, so we can complete our historic duty to deliver on the decision of the British people and leave the European Union with a smooth and orderly exit," she said.

In a clear reference to all the reports over the weekend of a planned coup against her leadership, May said while she did not "tour the bars and engage in the gossip", she did make time to speak to colleagues and gauge their mood.

"And I have heard very clearly the mood of the parliamentary party. I know there is a desire for a new approach and new leadership in the second phase of the Brexit negotiations and I won't stand in the way of that," she said.

"I know some people are worried that if you vote for the withdrawal agreement, I will take that as a mandate to rush on into phase two without the debate we need to have. I won't; I hear what you are saying!" May added.

Her plea to her deeply divided party to help her "get the deal through and deliver Brexit" came against the backdrop of yet another dramatic day in the House of Commons when MPs voted in favour of a motion to vote on a series of eight alternatives to May's withdrawal agreement.

May remains determined to bring her deal—scuppered twice before by MPs over the controversial Irish backstop clause—back for a third "meaningful vote" in the House of Commons and will hope her resignation offer may prove enough to see it over the finish line this time within the April 12 extended Brexit deadline agreed by the EU.