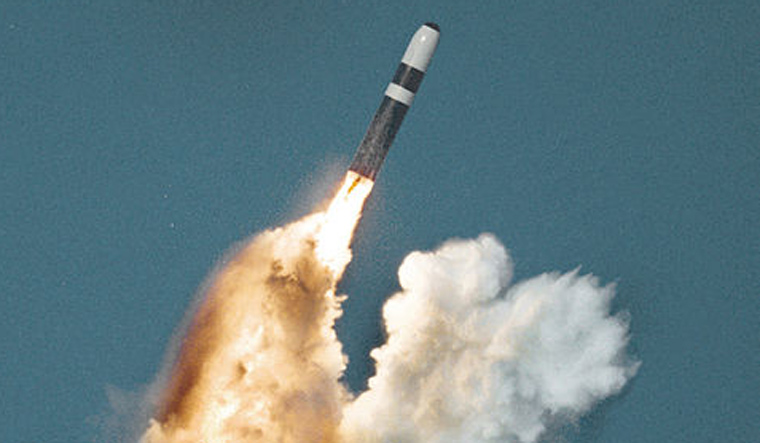 A US Trident SLBM being fired | Wikipedia Commons

US and Hong Kong-based media agencies have reported that China has tested a new submarine-launched ballistic missile (SLBM) capable of a range of around 9,000km. The weapon is expected to significantly improve China's nuclear strike capabilities.

In comparison, the Indian Navy's INS Arihant, which completed its first deterrent patrol recently, is armed with missiles with a range of 750km and will only get the 3,500km-range K-4 missiles in the future.

The South China Morning Post reported China's People's Liberation Army Navy (PLAN) had tested the new missile, dubbed the JL-3, in the Yellow Sea in November. The Washington Free Beacon, a US-based news website, quoted US intelligence officials as saying the JL-3 was tested on November 24.

The South China Morning Post report, authored by Minnie Chan, quoted Chinese experts as saying while the JL-3 would have a shorter-range than the US Trident missile, it will provide greater capability than the existing JL-2 SLBM, which is thought to have a range of 7,000km. The JL-2 missile is deployed on four Type-094 class nuclear-powered ballistic missile submarines (SSBN), with each vessel capable of carrying up to 16 missiles each.

The Pentagon's Annual Report to the US Congress on China's military in 2018 said the JL-3 will be deployed on a new class of SSBN, dubbed the Type-096, from the 2020s.

Missiles like the JL-2 and JL-3 give China's fleet of SSBNs—far smaller in size than the US Navy's fleet—the ability to target parts of the continental US without venturing into the deep Pacific, thereby avoiding detection by enemy ships. The Indian Navy plans to have at least six Arihant-class submarines, with some ships expected to have larger dimensions to carry longer-range missiles. However, as the JL-3 test shows, China continues to maintain a lead over India in the realm of submarine-launched nuclear weapons.