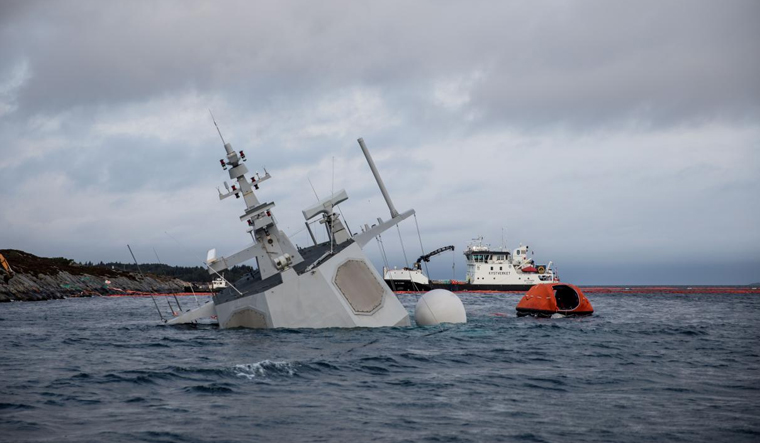 A multi-million dollar warship under the NATO command was entirely submerged after it struck an oil tanker in the early hours of November 8 in a Norwegian fjord.

The KNM Helge Ingstad, dubbed as 'unsinkable', collided with a Malta oil tanker Sola TS. A 10-metre-long gash was torn into the side of the warship, which is one of the five in Norway's navy. The tanker, however, is said to be unharmed.

The efforts to rescue the ship, which ran aground on underwater rocks, were foiled after the cables, attached to hold the frigate in place to prevent it from sinking, snapped. Now all that remains above the waterline is the frigate's top, antennas and radar.

The warship was on its way home to Haakonsvern naval base after travelling around the fjords for navigation training.

Questions remain as to why the well-equipped warship could not avoid hitting the slow moving, 62,557 ton, 250-metre-long oil tanker. The KMN Helge Ingstad is one of the five Nansen-class frigates billed as “unsinkable” due to its construction with water-tight zones designed to keep the warship “intact and operable”.

All the crew escaped and only eight of the 137 on board were hurt. According to CNN, a joint Norwegian and Maltese investigation is now underway to try and determine the cause of the collison.

The crash and the subsequent sinking of the frigate has given rise to discussions on gender politics and political correctness in Norway.

Sound recordings and radar logs have revealed crude, almost incomprehensible, human errors made by the crew. According to experienced naval officers, the mistakes make the crew look amateurs. This, too, seems to have supported the claim of sceptics who have wondered about the role of women in armed forces.

The Norwegian publication Armed Forces had in an article heaped praises on the KNM Helge Ingstad crew in which four out of five navigatos were women. “It is advantageous to have many women on board. It will be a natural thing and a completely different environment, which I look at as positive,” Lieutenant Iselin Emilie Jakobsen Ophus, a navigation officer at the warship, had said.

Norwegian journalist, military expert and political analyst Helge Lurås has suggested that the dramatic incident is closely related to the proportion of women in the Norwegian Armed Forces.

Luras claimed that the inclusion of women in the armed forces has had an effect on its professional culture. He writes that the armed forces prefer to be politically correct by increasing the number of women in the agency. "It is assumed that women make the Armed Forces better. Those who should think otherwise, receive a plain message that their opinions are undesirable," Lurås wrote.

Luras questioned Navy's reluctance in giving out the details of the incident as to who were at the helm at the time. He asks whether the Navy's priority should be spending energy and resources on 'integration' and creating a 'balanced' work environment or defending the country with the best available resources.

The uninsured frigate has cost the Norwegian Navy its entire annual budget, but the country also lost millions of dollars with several oil and gas fields being temporarily shut down due to the accident.