Imran Khan's car sale fails to bring in the moolah 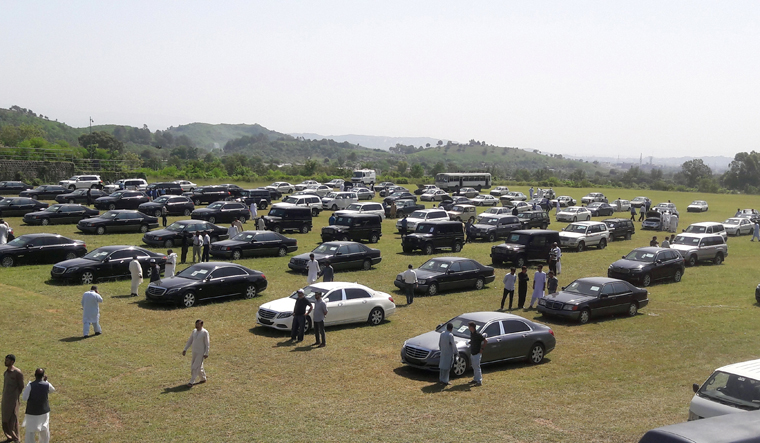 People visit an auction of government owned used cars at the premises of Prime Minister House in Islamabad, Pakistan | Reuters

In his first address to the nation, Pakistan's new Prime Minister Imran Khan Khan had emphasised on cutting government expenditure and as part of the cost-cutting initiative, he had announced several austerity measures. In August, the new government had taken several decisions to cut spending. It had banned the discretionary use of state funds and first-class air travel by officials and leaders, including the President and the Prime Minister. The new PM also decided to use only two cars and refused to use elaborate official protocol.

Though the efforts seem well thought out, the execution might not be going as planned.

Within a week of announcing his plans austerity plans, it emerged that promises to tighten the belt evaporated when it came to his commute from his private home to his official residency. It was reported that Khan had been making the 15km journey by helicopter. The choice of transport came under criticism and was defended by Khan's Information Minister Fawad Chaudhary who claimed that it cost only 55 rupees per kilometer. He claimed that it was cheaper to take the helicopter than to pay for an entire motorcade that cause traffic jams and other inconveniences. The minister must have forgotten to include the cost of maintenance and other expenses that comes with a chopper ride, not to mention the actual cost of fuel which comes to around 1,600 rupees per kilometer.

It was not very long after when the administration announced the sale of about 100 luxury vehicles of the Prime Minister House under the austerity drive. The sale was held on the lawns of the PM House. But it failed to live up to its name, despite heavy publicity.

The government had hoped to get at least $16 million from the sale but managed to make only $600,000 from the sale of 70 cars. Bullet-proof jeeps and several Mercedes Benzes, BMWs went under the hammer. Toyota cars, 40 of them, a Lexus SUV, and two Land Cruisers were also up for auction.

Other vehicles that are being auctioned include eight Suzuki cars, five Mitsubishi vehicles, nine Hondas and two jeeps.

The highlight of the auction was two Mercedes Maybach S-600s, purchased by former PM Nawaz Sharif in 2016. There was a roar of laughter among the 500 bidders when an asking price of $1.3m was announced for each car. There were no takers for it.

Seven BMWs, and all 14 Mercedes Benz S-300s from 1993 went unsold and the most expensive car that did get sold was a bullet-proof 2015 Toyota Land Cruiser, which netter almost $200,000. Four bullet-proof 2005 Mercedes jeeps also found buyers, according to the BBC.

The cars were sold at “above their market price” as not only do they have additional gears fitted, there is also the VIP factor that gives these cars a certain value. In fact, some of the cars were bought only for that value.

Though the auction did not achieve its target amount, more sales are expected in the near future. In fact, quite a few bidders who attended the car sale were interested in four helicopters that were put up for sale. But they will have to wait till later this month to get their hands on it.

A puzzling tweet by one of the PM's aides raised questions about "eight buffaloes" which are expected to go on sale. Apparently, the buffaloes were used by ex-PM Nawaz Sharif for his "gastronomic requirements". The PM's aide has asked potential buyers to “get ready”.