French arms exports halved in 2017 as Rafale sales dried up 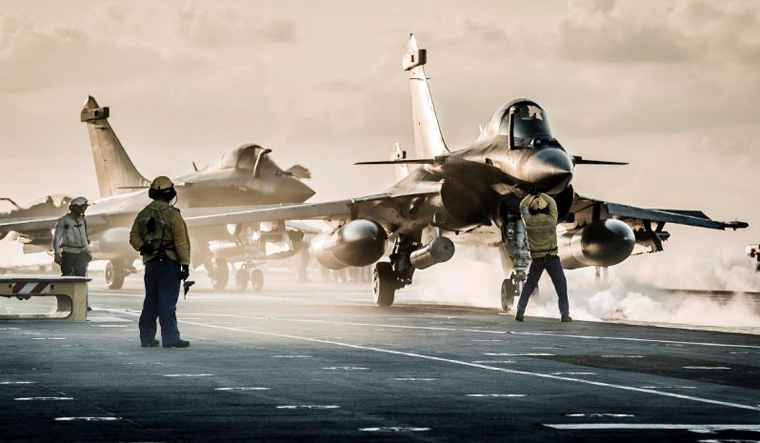 In its annual report to parliament, the ministry said the value of exports dropped to 6.9 billion euros ($8 billion) from 14 billion euros the previous year and the record 17 billion euros booked in 2015.

Those two years saw the first big export orders for Rafale jets made by Dassault Aviation—to Egypt, Qatar and India—following a string of failed efforts to sell the planes outside France.

But France, the world's third-biggest arms exporter after the US and Russia, will book an additional 12 Rafale sales to Qatar this year.

"The results from 2017, with 6.9 billion euros, are in line with the average from years before the Rafale contracts," the ministry said.

It added that helicopters and missiles made up nearly half of last year's foreign orders.

Orders from Middle East clients rose to 3.9 billion euros from 1.9 billion euros in 2016, despite an economic slowdown stemming from lower oil prices, "which delayed some acquisition projects", the ministry said.

NGOs and other critics have assailed France for supplying weapons to middle eastern governments, in particular Saudi Arabia and the United Arab Emirates over their support for pro-government forces in Yemen fighting Houthi rebels.

The Rafale continues to remain among the most high-profile weapon systems offered by France for export in addition to helicopters, surface warships and submarines. It is expected to be the sole fighter aircraft in French service in the coming years as older 'Mirage' variants retire; however, despite its advanced technology, the Rafale has had a mixed record in winning export sales compared with previous generations of French fighters.

A much-touted deal by India to buy 126 Rafales was axed by the Narendra Modi government in 2015 after years of negotiation, with India settling for a smaller, outright purchase of 36 Rafales. Dassault has again offered the Rafale to the Indian Air Force for a new contract to buy 110 fighters and is also bidding for a separate Indian Navy contract for 57 fighters.