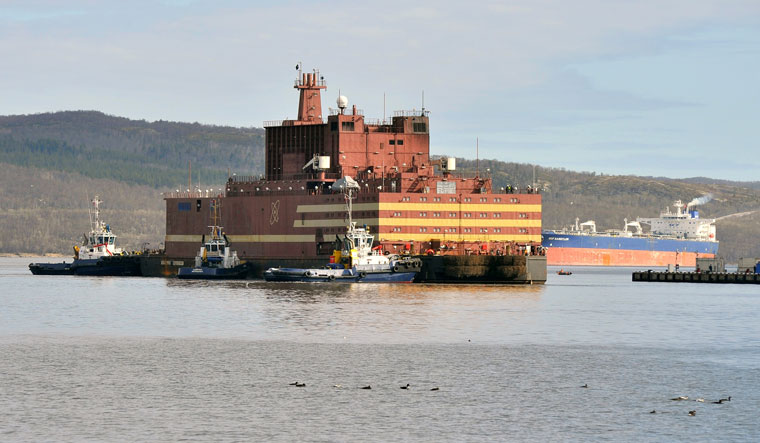 Akademik Lomonosov is ready to swim, fully loaded. It has already swum 4000 km across four seas – the Baltic, Northern, Norwegian and Barents from Saint Petersburg to Murmansk.

Now at Murmansk, Akademik Lomonosov will be loaded full with nuclear fuel, and then will sail all the way to the town of Pevek in Chukotk in Russian Far East. There it will be connected to the grid to become the world’s only floating nuclear power plant and the northernmost nuclear installation in the world.

“We have successfully towed the power unit, not yet loaded with nuclear fuel, to Murmansk and are going to fully launch here this unique project,” said Rosatom Director General Alexey Likhachev at the welcome ceremony that took place at the pier of Atomflot, the maritime subsidiary of Russia's atomic authority Rosatom. “Akademic Lomonosov is an unparalleled piece of engineering by Russian scientists. It is a first-of-a-kind, a reference project for mobile medium capacity range nuclear power units, a product we expect to be in growing demand in the coming years.”

Rosatom claims that nuclear power is the only feasible way to reduce the Arctic region’s dependence on coal which leads to leads to excessive carbon dioxide emissions in millions of tonnes and toxic pollution, destroying the region’s fragile ecosystem. Ben Heard, the Executive Director of Bright New World Organization said: “It is fair to point out that the Arctic is a vulnerable ecosystem. But its greatest vulnerability is to climate change. This power plant is going to replace an existing coal-fired power station and provide zero-carbon electricity generation for 50,000 people. There is literally no prospect of that energy coming from renewable sources in that location. Any organisation citing ‘protection of the Arctic’ to make blunt objections to this or any other nuclear project has the risks back-to-front and upside-down.”

Nuclear fuel will be loaded into Akademik Lomonosov’s reactors in Murmansk in the coming months. In 2019, nuclear FPU Akademik Lomonosov is expected be towed to the sea port of Pevek. Average towing speed is estimated at 3.5 – 4.5 knots. All necessary construction work to create on-shore infrastructure are under way in Pevek.

The floating power unit is equipped with two KLT-40C reactor systems, each with a capacity of 35 MW, similar to those used on icebreakers. The vessel is 144 metres long and 30 metres wide, and has a displacement of 21,000 tonnes. The lifecycle of the unit is 40 years with the possibility of being extended up to 50 years. After decommissioning, it will be towed to a special deconstruction and recycling facility. No spent nuclear fuel or radioactive waste is planned to be left in the Arctic. Spent fuel will be taken to the special storage facilities in mainland Russia.

The FNPP was designed to make it possible to supply electricity to hard-to-reach areas of the Russian Federation. The reactors have the potential to work particularly well in regions with extended coastlines, power supply shortages, and limited access to electrical grids. The plant can be delivered to any point along a coast and connected to existing electrical grids.

Akademik Lomonosov, the first ship of this kind, was named after the 18th century Russian scientist Mikhail Lomonosov.