Modi and Xi have displayed intention to reduce suspicion. However, is it enough? 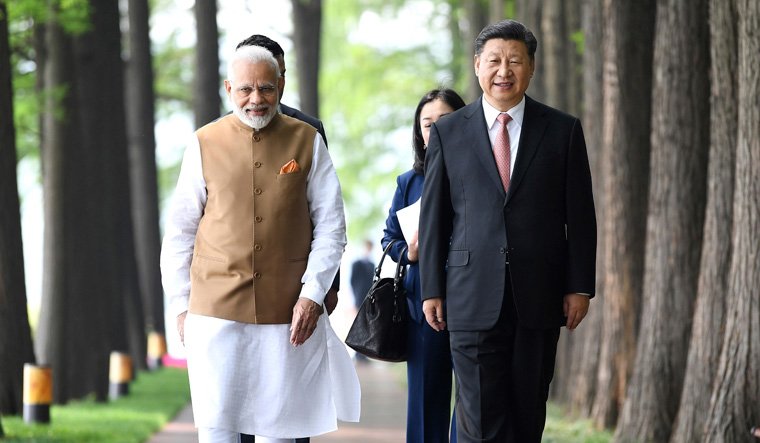 It has been the week of bromance. In America, with Donald Trump and Emmanuel Macron, even though it may have not ended in everlasting love. In Korea, where history has been made. And in Wuhan, where Prime Minister Narendra Modi and President Xi Jinping openly courted.

There was a walk along the river, a boat-ride, and then there was chai pe charcha—Xi style. The meeting at the guest house of the East Lake spilled to two hours, instead of the 30 minutes that was assigned, again signalling the intent of the two to change the course of the conversation from confrontation to consensus.

“It remained an understanding-centric summit, rather than an outcome-centric one,” said Ashok Kantha, former ambassador to China, who now heads the Institute of Chinese Studies. “There are a lot of concerns about each other's strategic intentions, and there is a need for closer strategic cooperation. It is a Chinese term, but it is important. The summit has proven useful for that.”

The summit has set the tone. In China, leader-led messages carry weight.

For the most, Xi-Modi courtship seems to have lived up to the script. Before he embarked on his three-day trip, Modi tweeted, “We will discuss our respective visions and priorities for national development, particularly in context of current and future international situation.”

Coming together, especially after a much publicised tussle, does signal to the world that the elephant and the dragon can talk. In a world that is shutting down channels of communication, this projects both Xi and Modi as world statesmen, a tag both clearly aspire to.

The informal summit—without a set agenda—seems to be on the way of becoming institutionalised. Modi suggested that he would play host in India next year. The two leaders may not have arrived at a new modus vivendi—but there is certainly a suggestion of new vocabulary in the statement issued by the ministry of external affairs. Decisional autonomy is a new term in the China-India vocabulary, probably crafted by the new foreign secretary, Vijay Gokhale, who is an old China hand. The idea of the summit may not have taken place in his tenure, but Gokhale—who was brought in during the Doklam crisis, and issued the now famous letter to ask Indian officials to stay away from the 60 year Thank You India celebrations of the Tibetan government in exile—will have brought his stamp and spirit to the summit.

“Characterisation of India and China as two major powers with strategic and decisional autonomy is important. It is a signal to China that we pursue independent foreign policy. We are not part of anyone's gameplan. We are developing relations with the US and Japan, but forge our path,” said Kantha.

Modi and Xi have certainly displayed intention to reduce suspicion. However, is it enough? The disparity in both the statement issued by India and China, subtle of course, suggests—China mentions terrorism and differs on trade—that both the countries are playing it as a win for their own domestic audience.

“The two leaders underscored the importance of maintaining peace and tranquility in all areas of the India-China border region,” an MEA press release read. There has also been a signal sent to the two armies, to call it quits.

Modi and Xi agreed to “handle differences through peaceful discussions'' and in keeping with “the importance of respecting each other's sensitivities, concerns and aspiration”.

The implication is clear—the two want to keep differences off the table. China, in its statement, doesn't mention sensitivities.

In an increasingly volatile world, it makes sense. In last six months, there have been developments across the globe that could impact closer home. The new cold war, as it is being referred to, with the West and Russia pitted against each other. There is increasing violence in Afghanistan. The peace deal doesn't seem to have taken off. West Asia is in a precarious situation and Trump has started a trade war with China.

There is a lot at stake. For Xi and Modi, this was an opportunity to rekindle the relationship. Modi will be keen to prove that his diplomacy goes beyond photo ops. That beyond the energy he brings to the relationship, he also brings the ability to cement it. The Wuhan summit, so far, doesn't seem to have suggested deepening of the relationship. It has, however, confirmed what many feel that China is posturing but friendship is a long way off. For Xi too, this summit comes at a time when he is fighting a battle with America and he will be keen to establish his legacy.

The summit was also a pragmatic decision. Doklam was a wake-up call both diplomatically as well as strategically. It exposed India’s limitations. “There is a serious shortcoming in the Army,” said M.V. Rappai, honourary fellow, Institute of Chinese Studies. “It is not equipped to fight a modern war.”

Modi, in his remarks to Xi, spelt out his vision for India-China relationship. “When I talk about the world's strength, we have a built-in people-to-people contact. And when I talk about strength, for me, 'S' stands for spirituality, 'T' for tradition, trade and technology, 'R' for relationship, 'E' for entertainment like movies, dance, music and art, 'N' stands for nature, 'G' for games , 'T' for tourism and 'H' for health and healing, and we can make all our plans with these alphabets,” he said.

There is also the wariness that exists—despite the optics—of another T that Modi didn't refer to: trust. “It is too early,'' said Jayadeva Ranade, a security and intelligence expert. “It has given the two leaders time to assess each other. But it remains to be seen how and if the two countries can work together. It has lowered temperatures, but trust is still a long way.”

This won't be easy. There is deep suspicion in India about China, especially after Doklam. It will be important for Modi to be able to make this relationship palatable for India—read, in national interest. Especially, with hyped up jingoism that exists. For China too, this is a concern.

The unease about dealing with China goes beyond just popular sentiment. The Army—which had been instrumental in ‘resolving’ the Doklam impasse—isn’t too comfortable with the decision to trust China. Nor is the security establishment.

For diplomats, the Doklam issue has been ‘resolved’ with work on the road having stopped. The defence establishment believes that the threat is far from over. Their presence near the border is far from comforting. Air Force chief B.S. Dhanoa recently pointed out the increase in the fighter jet deployment of the Chinese in Tibet. “We need to plan as per our adversary's capability, for intentions may change overnight,” he asserted.

The problem is that for trust, another T is needed: And trade will be at centre of resetting the relationship to a more even keel. Trade—and the imbalance—is an area that India needs to fix. The current figures for the trade deficit between the two countries is $63 billion.

So far India has not got any assurance that this situation will change. China's statement doesn't refer to balance, instead it says the two will “tap into the full potential of business and investment cooperation, set new targets, harness positive forces, and explore new ways of cooperation to achieve win-win results”. India will need to push for more deliverables in trade, especially, if this marriage needs to be a long lasting one.

But beyond the economics, it is the other problem of the overlapping of the sphere of influence that will be at the heart of the true reset or test of the relationship. For two countries, who are emerging powers and neighbours, rubbing up against each other, as the former national security adviser Shivshankar Menon had put it, the understanding of mutual areas of interest won’t be easy.

India and China—the two emerging powers in Asia—will need to perhaps find a way to make sense of the new world order. Or, at least, lay down some boundaries. Especially, to deal with the overlapping footprint India and China have in land and maritime. This is easier said than done.

The absence of maritime from the statement issued by the MEA is telling. And it exposes that there may be understanding but there are gaps. Can this lead to another tiff?

On land too, there is the One Belt One Road Initiative and China's special relationship with Pakistan—prickly issues that remain. China and Pakistan—especially the economic corridor that passes through Indian territory—are long standing problems that will need to resolved. This along with other outstanding issues, especially because of the overlapping of the sphere of influence, can't be “wished away”, believes Kantha.

But courtship apart, it is commitment that matters. The challenges of the real issues still remain. “It creates a better environment to deal with issues,” says Kantha. “But unless those issues are dealt with there won't be a qualitative change in the relationship. It is this sort of mismatch between the security establishment and the bureaucracy that Modi will need to project this summit a “milestone’’ as the Chinese foreign minister Wang Yi put it.

One thing is clear. Both India and China need a new modus vivendi. A term that Menon has used as well as Kantha. The earlier relationship, that was started from Rajiv Gandhi's gamble in 1988, served well for that time. Now, it’s a brand new world. The question is—have Xi and Modi found it in Wuhan?