First white card in football shown. Here's what it means 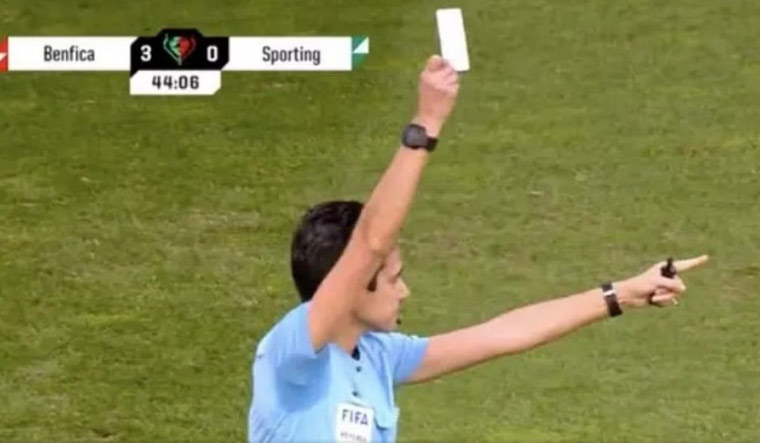 If there's one moment that all footballers dread on the pitch, it's when they hear the referee's whistle and find him or her pulling out a card from the pocket. It can be a yellow, or worse, a red card, depending on the degree of foul committed or for a disciplinary issue. It started over five decades ago, at the 1970 World Cup.

But, have you ever seen a referee flashing a white card? It happened for the first time in the history of the sport, in a women's match between Benfica and Sporting Lisbon in Portugal on January 21. Benfica were leading 3-0 when a player on the bench in one of the dugouts felt unwell at the end of the first half. Medical staff from both the teams attended to the person, which led to the referee, Catarina Campos, showing the white card to the medical staff of both the teams.

What is a white card and when is it used?

The white card is shown to recognise and encourage fair play in football and has been conceptualised to “improve ethical value in the sport”. It is part of a new initiative in Portugal to encourage teams to act in a fair manner and get instant recognition for it.

It is limited to Portugal for now, but is part of a larger initiative by FIFA to bring in innovations in the sport.

Former UEFA president Michel Platini had once proposed the use of a white card, albeit for a different purpose. In his book Parlons Football (Let's Talk Football), he suggested the white card be used by the referee as a punishment for dissent, that would see the guilty player being suspended from the field of play for 10 minutes – somewhat similar to field hockey.

Platini proposed it to combat the "mania of challenging the referee" which "is spreading like a true epidemic in football".