'Brazil Hexa!' Inside a country's dream of a sixth World Cup

The streets across Brazil have been painted with the flag colours 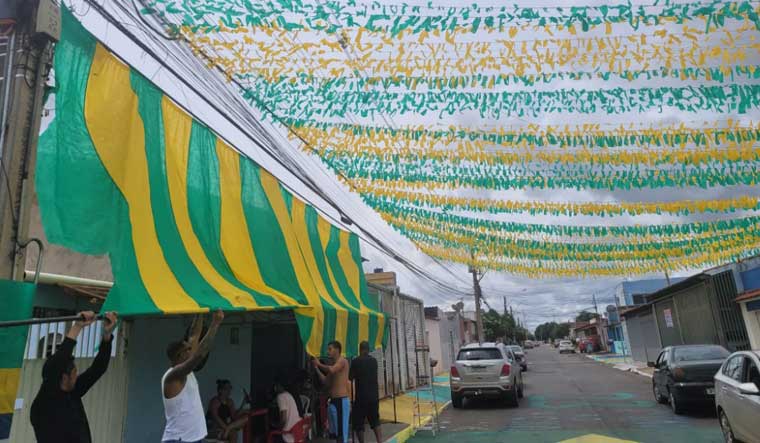 Streets adorned with national flags and its colours in Brazil.

The green, yellow, and blue of the Brazilian flag, bright on street sidewalks and stretched over the neighbourhood streets, are spinning high dreams of a sixth World Cup for the storied country of Pele, Ronaldo, and Neymar.

And Brazilians are readying the party to ride the updraft of Team Brazil victories, revelling in the pride of being the only country to win the cup five times. Fans are creating street sanctuaries to share the joy, the moments of high pressure and the fear of frayed dreams in a sense of community and belonging.

Neighbours and friends in streets across Brazil have been for weeks planning and getting together to paint the flag colours on the side roads and decorate walls and hang string streamers overhead. 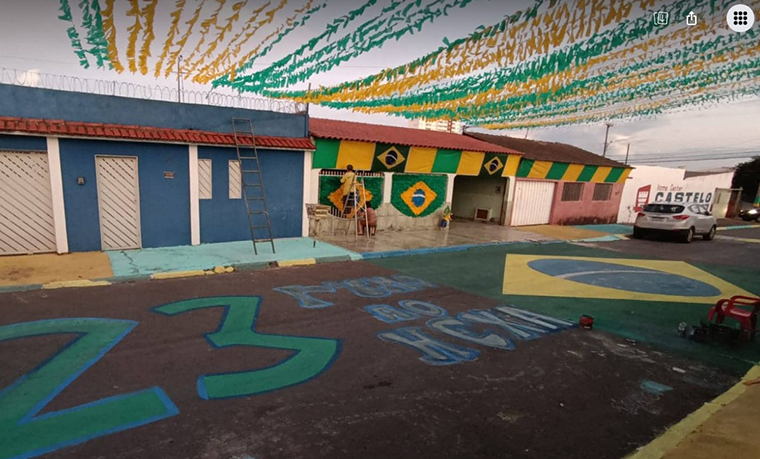 There are big corporate and commercial events, for sure, like the FIFA Fanfest along Rio de Janeiro’s iconic Copacabana Beach prepared to host tens of thousands of fans. Bars and restaurants across the country too are preparing local game-watching events. In Sao Paulo, the city hall is preparing large projections of the games in stadiums.

But, it is in the streets and neighbourhoods where one can feel the Brazilian passion for the World Cup and its national team. You can almost see the green and yellow blood in the veins of fans painting the streets, getting their children excited, and putting up flags and memorabilia to create the mood.

Smack in the centre of Brazil, away from the big coastal cities, on a street in Ceilandia in the great Cerrado inlands of the continental country, two-year-old Katia Helana Caires, flanked by her grandparents dressed in yellow, is all decked out in the national team colours, kicking a football on a giant Brazilian flag painted on the street itself.

It is the same thing her dad Kassiano Caires was doing when he was two, he says, in that same street on a watch fest put together by his father and family during the ‘98 World Cup. It was the 16th time Brazil took part in the Cup in its then-16 editions. The national team was in the final game but was defeated by France 3-0.

Heartbreak or victory, shouts of joy or tears of disappointment, Kassiano's father and uncle, Alvaro and Milton Caires, have been bringing people together to watch the games. Along the painted street, and across from the storefront pass-thru Bar do Neguinho, the street’s watering hole, they turn their garage into the game field with a large television covering the entrance and seats on the streets to watch and cheer. 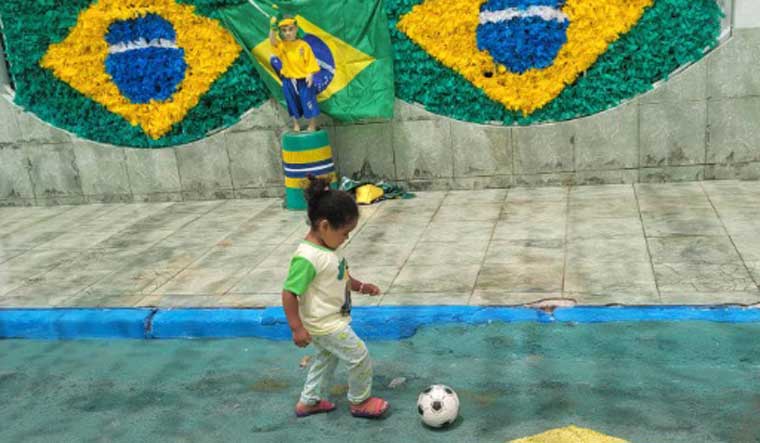 "We feel proud to support Brazilian football, the best in the world," said Milton. "The World Cup is much joy and Brazil is going for its sixth cup."

On the next street, Wellington has been setting up the neighbourhood for World Cup game watch parties for the last 24 years. Rafael Cordeiro, Edemilson, Marcilo and Lukas are busy painting the curbsides and you know this is a serious thing for them.

People will be constantly connected to the cup games, following from the office, cell phones or wherever they say, but the neighbourhood streets are where they really become part of the World Cup. "Come game time, we will be ready to party," they say.

Government offices will be closed during the games, according to official announcements, and though private businesses are not required to allow their staff to watch the games, they are highly encouraged to do so and not discount the game time from wages.

All the festivities and preparations are important this year because the country needs to get over the effects of the pandemic and a bruising political campaign, said Milton.

In the years since the last cup, the national team’s yellow jersey has become the symbol of Bolsonarismo, yet beginning with his acceptance speech after winning the elections, president-elect Lula has vowed to reclaim it as a national symbol of national pride and unity. 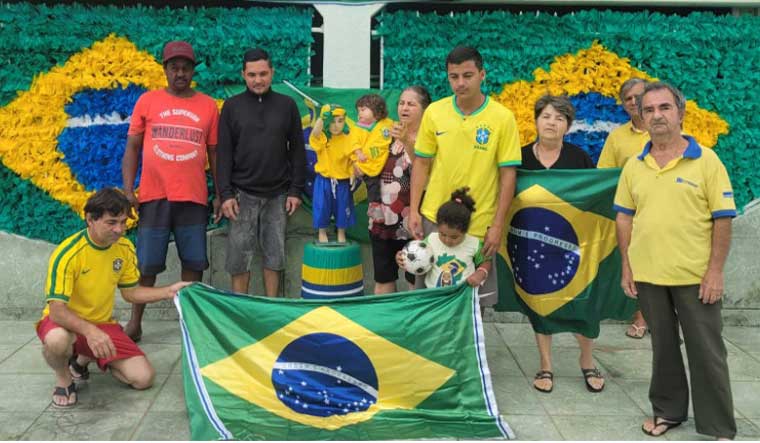 As election passions still steam in parts of the country, increasingly the yellow jersey is seen by people with Lula election signs still in their cars, and many Brazilians seem ready to focus on the other national passion.

"Let lose a cream from the chest...

How to make a champion

Because only we have the five stars

In the yellow-green soul

And we know how to get emotional

Singing our hymn a cappella

To our beloved, Brazil"

That chant, "Mostra Tua Força Brasil," - Show Your Strength Brazil- from a jingle created for the 2014 cup that celebrates the national pride of Brazilians who continued to sing their national anthem after the music stopped before the games, also replaced a prompt to wear the national colours with a call to show strength through the colours of its flag.

The World Cup is a time when countries measure and compare each other. In south America these days, the football powers are Brazil and Argentina.

And that folklore that measuring up, that ribbing, has gone from the streets to the social networks. Brazilians are needling the favoured Argentinians and Messi, comparing the countries' World Cup records.

Dressed in green and yellow stripes, Brazilian fans in Qatar celebrated their five previous World Cup wins versus Argentina’s two. In Brazil, they sang the same song pumping the air and jumping up and down to the beat of samba drums.

The provoking song has gone viral in Brazil to the Argentinians who are counting on Messi's magic to win their third.

As for Argentina, in Buenos Aires and different provinces,  schools and universities have put large television sets in the classrooms so they could watch the games. They are optimistic too as they predict Argentina going all the way to the final.

Buenos Aires itself has set up a huge "World Cup Emotions Plaza" where neighbors can watch the games and celebrate winning the cup.

On the party-ready streets in Brazil too, there is no shortage of excitement in adults, the young, and even small children. There is real faith in a sixth cup, "O Hexa!"