'Lot of players will get chances': Pandya on roadmap for 2024 T20 World Cup 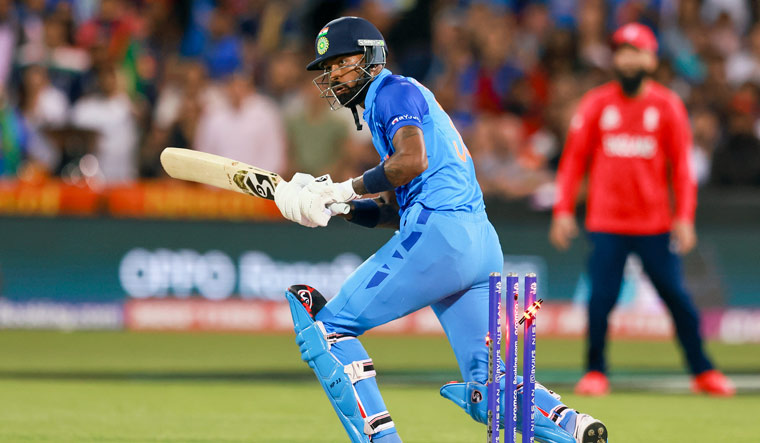 Stand-in T20I skipper Hardik Pandya on Wednesday said the road map for 2024 T20 World Cup starts now, adding that going forward, a lot of players will be given chances to stake their claim in the side.

Pandya, who will be leading India in the three-match T20I series against New Zealand, starting Friday, said the team needs to overcome from their World Cup failure. "Yes, we all know there is disappointment of the World Cup but we are professionals and we need to cope with it. How we cope with our success we cope up with our failures and move forward and look forward to get better rectify our mistakes," Pandya told reporters.

The next T20 World Cup will be played in 2024 in the West Indies and United States and the Indian squad is expected to undergo a major transition in the next two years with the likes of Virat Kohli and Rohit Sharma among others being gradually eased out of the set up.

"Yes, the next T20 WC is almost two years so we have time (to unearth new talent). A lot of cricket will be played and a lot of people will get enough chances.

"The road map starts from now. But it's too fresh right now. We have a lot of time so we will sit down and have conversations on those grounds," Pandya said.

"Right now it's making sure that the boys enjoy playing here. We will talk about the future later," he added.

The white-ball tour of New Zealand that includes three T20Is and as many ODIs will not feature Kohli, Rohit, opener KL Rahul, keeper-batter Dinesh Karthik and veteran off-spinner Ravichandran Ashwin, as all have been rested as part of "workload management of players".

In their absence, the likes of Shubman Gill, Umran Malik, Ishan Kishan and Sanju Samson have been given a chance and Pandya says it will be an important series for them in the grand scheme of things.

"The main boys are not here but the same time the talent which the guys who are already here, they have also been playing for one and-a-half, two years now," he said.

"They have had ample chances and enough time in international cricket to express themselves and show what they have. Very excited for them, new bunch of guys, new energy and excitement.

"Every series is important. You can't play an international game thinking its not important. Yes World Cup is there but that's a different format, it's 50 overs.

"But it is an important series for a lot of boys who if they eventually do well here will be able to put a strong case going forward."

'We don't need to prove anything to anyone'

In a scathing column after the semifinal loss, former England captain Michael Vaughan wrote that India has achieved absolutely nothing since winning the ODI World Cup at home in 2011 and has been the most under-performing white-ball team in the history.

Asked about Vaughan's remarks, the all-rounder said, "I don't think we need to prove anything to anyone.

"Obviously when you don't do well, people will have their opinion, which we respect. I understand people have different point of views," Pandya said.

"Being at the international level, I don't think we need to prove anything to anyone. It's a sport, you keep trying to get better and eventually when the result is supposed to happen, it will happen.

"There are things we need to work on, going forward we will rectify and work on it," he added.