'Indian teams can qualify for World Cups on merit': Bhutia 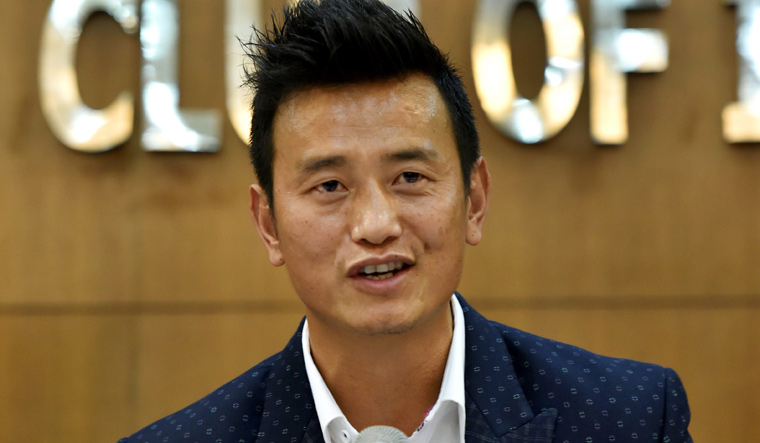 Indian senior and age-group teams can qualify for World Cups "on merit" in near future if the country's football structure is "reformed" with more focus on grassroots development, legendary former Indian striker Bhaichung Bhutia said after filing his nomination papers for the AIFF president's post.

Former captain Bhutia on Thursday filed fresh nomination papers ahead of the All India Football Federation (AIFF) elections scheduled to be held on September 2. His nomination was proposed by Andhra Football Association (AFA) and seconded by Rajasthan FA.

"Indian teams, in age groups as well as senior teams, can qualify for World Cups on merit in the coming years but for that you need reforms and clean-up in the country's football system," Bhutia told PTI.

"We need more focus on grassroots development, we also need to give more emphasis on state associations because the talented youngsters will come only from the states. So, more budget will have to allocated to the states."

The 45-year-old Bhutia, who retired in 2011 after becoming the first Indian to play 100 international matches, said he will try to allot more money to the state associations if he is elected president of the AIFF.

"We have to focus more on two things. One is grassroots development and the other is more funding to state associations. There is no substitute to grassroots development, that is well known. But I want more focus and activity in that direction," said the talisman of the national team in his playing days.

Bhutia also said that the players will be at the centre of all activities and they will be given more facilities.

"I will work for a player-centric system, give more facilities to the players. The travel and accommodation of the players will be upgraded with more budget.

"For example, now if players from Arunachal Pradesh are to take part in a national championships in Kerala, they travel by train for three days. But my endeavour will be to allow the players travel by air."

Bhutia had earlier filed his nomination for the president's post which was to be held on August 28 under the aegis of the Supreme Court-appointed Committee of Administrators (CoA).

But, in a verdict on August 22, the SC terminated the mandate of the CoA, disallowed the inclusion of 36 former players in the electoral college and postponed the polls by a week in order to salvage the Women's U-17 World Cup whose hosting was jeopardised after FIFA suspended the AIFF.