Protests have been planned at Old Trafford 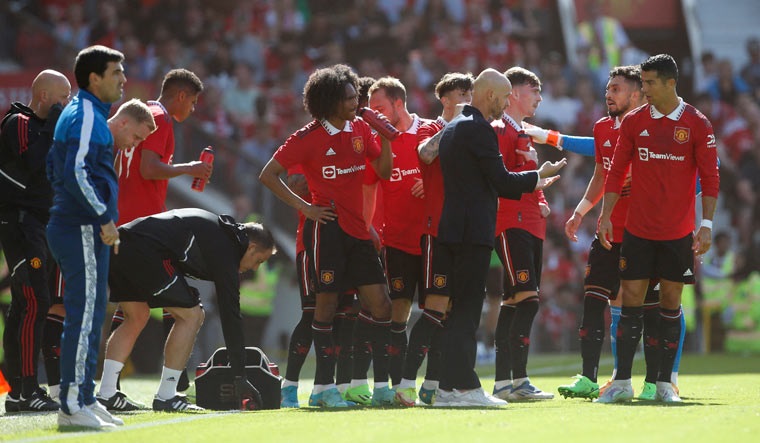 Frenzied talk of billionaires wanting or, in the case of Elon Musk, not wanting to buy Manchester United has topped the sports agenda in Britain this week.

A future without the Glazer family as owners? Yes please, many increasingly disheartened United fans would say after nearly a decade of underperformance by one of the world's most storied sports teams.

And however unlikely that immediate prospect is after all, the club is not for sale despite Jim Ratcliffe, one of Britain's richest people, expressing an interest this week - it's something many of those supporters will be calling for during an anti-Glazer march planned by a fans' group ahead of United's game against Liverpool at Old Trafford on Monday.

The last time such a protest took place before a home match against Liverpool, in May last year, thousands filled the concourse outside Old Trafford, flares were set off, the stadium was stormed and one of world soccer's biggest fixtures was called off.

For some, a repeat scenario would not be unwelcome.

There cannot be many United fans looking forward to the prospect of Liverpool, the team's fiercest rival, coming to Old Trafford given what has transpired in the opening two rounds of the season.

In fact, it's enough to fill them with dread.

Two games. Two losses. Six goals conceded. Only one goal scored, and even that was an own-goal. Oh, and to top it off, United are in last place.

If the 2-1 opening-weekend loss at home to Brighton was bad, the ensuing 4-0 thrashing by Brentford on Saturday was widely deemed to be one of the worst results in United's recent history.

Hence, the inevitable hysteria. Is Erik ten Hag, who joined from Ajax in the offseason, the wrong appointment as manager? Is Lisandro Martinez the wrong signing at centre back? Why hasn't United signed a defensive midfielder yet? Is this the end for Cristiano Ronaldo at United?

Over the past week, a slew of players in a number of different positions have been linked with United in the final days of the transfer window, including holding midfielder Casemiro from Real Madrid and American winger Christian Pulisic from Chelsea.

Ronaldo has teased on Instagram about his future, saying the media has been telling lies and, rather cryptically, that they know the truth when they interview in a couple weeks.

Then there was the drama of Musk tweeting he was buying United before saying several hours later that it was a joke, and Ratcliffe emerging as a potential buyer if the club that the majority shareholder of chemical group Ineos has supported since childhood was put up for sale.

It's rarely quiet around United, whether the team is doing well or badly.

And imagine if United are beaten again on Monday, to open a season with three straight defeats for the first time in the Premier League era (from 1992). How huge would the fourth game - against Southampton away - be for Ten Hag then?

Liverpool defender Virgil van Dijk isn't taking anything for granted, though, even if his team beat United 5-0 and 4-0 last season.

“They are a good team, in my opinion," Van Dijk said. "They have good players all over the pitch.

“Obviously they're not in the best situation, confidence-wise, probably, but it's the perfect game to turn it around for them.”

The same could be said for Liverpool, who have also underwhelmed so far with draws against Fulham and Crystal Palace and are already four points behind title rival Manchester City.

Injuries are taking a toll, with players like Thiago Alcantara, Joel Matip and Diogo Jota out, while the thrust and energy of the departed forward Sadio Mane is sorely missed. The man who effectively replaced Mane, Darwin Nez, is suspended for the United match after getting sent off for headbutting an opponent against Palace.

Liverpool keep getting off to slow starts, too, having conceded first in eight of its last nine matches in all competitions.

If United were to win, suddenly a lot of the heat might switch to Jurgen Klopp.

On current form, though, that looks unlikely. Stretching back to the end of last season, United are on a four-match losing run and the players are still getting used to ten Hag's methods.

It will be interesting to see, for example, if United continue to play out from the back - the approach which backfired badly against Brentford - or take a more pragmatic view against a Liverpool team so strong at pressing from the front.

And will Ronaldo start again? He was rushed back against Brentford, despite not being match-sharp after missing much of preseason, and there's still so much uncertainty over his future.

First of all, though, let's see if the match regarded as the biggest in English soccer actually goes ahead this time.