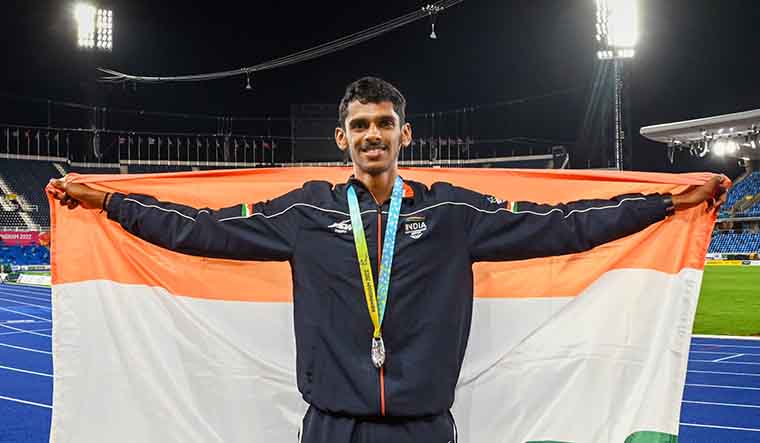 He may have missed out on the cherished gold by the thinnest of margins, but the ever-smiling Murali Sreeshankar, who bagged a historic silver medal in men's long jump at the ongoing Commonwealth Games, is hungry for more success.

The lanky youngster's road to silver was not that smooth as he slipped to the sixth spot after his 7.84m jump in the third attempt.

With two attempts remaining, the Kerala lad listened to his dad-cum-coach S. Murali's advice from the sidelines to execute a perfect 8.08m jump, which won him the silver.

Why did Sreeshankar lose out on gold despite tying for top position?

The 22-year-old endured a setback when the sport's latest technology, only introduced less than a year ago, caught him committing a foul in his fourth attempt. That jump, if it was fair, could well have been his best jump and put him on par for the gold.

Until recently, a no-jump in the triple and long jump was called when an athlete was judged to have touched the ground (a plasticine strip was laid down at 45 degrees from the take-off board to assist the officials) beyond the take-off line. Theoretically, if an athlete crossed the take off-line, he would leave a mark on the plasticine. But, in reality, there were cases when athletes visibly breached the take-off line without leaving any mark on the plasticine strip. Hence, on September 8, 2020, the World Athletics made a change in their technical rulebook, defining a foul jump as: “An athlete fails if . . they while taking off (prior to the instant at which they cease contact with the take-off board or ground), break the vertical plane of the take-off line with any part of their take-off foot/shoe....”

A gold was still within his grasp and Sreeshankar knew that as well. Locked on at 8.08m with eventual gold medal winner Laquan Nairn of Bahamas, Sreeshankar would have won a gold if he had jumped 7.99m in his last attempt.

But to his and the Indian contingent's disappointment, Sreeshankar's foot on the board was found to be ahead of the foul line by 2cm as measured by the laser beam under the newly-introduced foul detector system.

The other medallists in the past

He is also fourth Indian jumper since Babu, Anju Bobby George (bronze at Manchester Games in 2002), and M.A. Prajusha (silver at New Delhi Games in 2010) to win a medal at the showpiece event.

In 2018, Sreeshankar's dreams were dashed as he missed out on his CWG debut in Gold Coast because of a surgery due to ruptured appendix.

He was in intensive care for a week, followed by intensive rehabilitation. It took him five-six months to get back on track because of the infection and poisoning.

He finished a disappointing sixth in his Asian Games debut at Jakarta the same year.

He failed to qualify for the finals of the 2019 World Athletics Championship in Doha. At the 2020 Tokyo Olympics last year, he finished 13th in his heat, recording a best distance of 7.69 on his very first attempt. The Athletics Federation of India (AFI) then asked the 23-year-old to stop training with his father, who was a former international triple jumper.

The silver medal in the CWG 2022 deserves celebration, but Sreeshankar, who is now pursuing a postgraduate degree in statistics at Government Victoria College, Palakkad, Kerala, has already set his sights on the next targets - Monaco Diamond League and the Budapest World Championships next year.