Wimbledon: Djokovic labours into second round 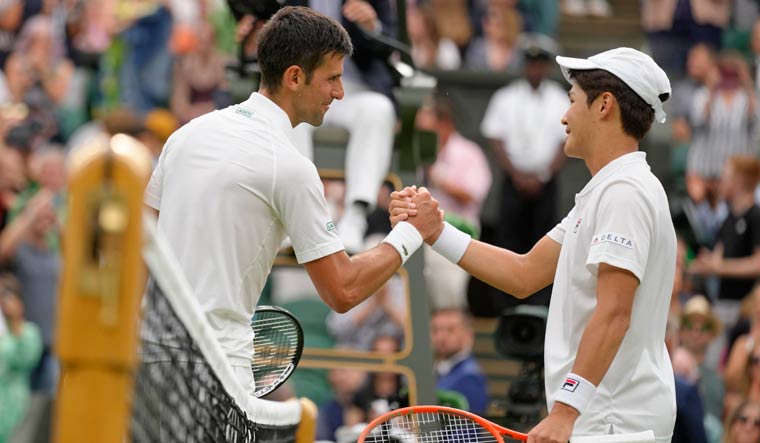 Top seed Novak Djokovic overcame a tough challenge from Korean Kwon Soon-woo to reach the Wimbledon second round, with a 6-4 3-6 6-3 6-4 victory on Monday.

The defending champion, bidding for his fourth Wimbledon title in a row and his seventh overall, looked out-of-sorts at times against the 81st-ranked Kwon, as he had not played a grasscourt warm-up tournament

The 24-year-old Korean broke Djokovic's serve in the fourth game of the second set and went on to win it with a drop-shot and a big serve. But the Serb, aiming to win a 21st Grand Slam title, recovered enough of his trademark consistency to see off the challenge.

He secured victory with an ace on his first match point and will next meet either Thanasi Kokkinakis of Australia or Poland's Kamil Majchrzak. It was Djokovic's 80th Wimbledon win and he became the only man to have won 80 matches at all four Grand Slam tournaments.

The Serb, who won three Grand Slams last year, missed the Australian Open in January after being deported because he was not vaccinated against Covid-19. He lost in the French Open quarterfinals to eventual champion Rafael Nadal who is seeded second at Wimbledon.

Meanwhile, Tunisian third seed Ons Jabeur crushed Mirjam Bjorklund of Sweden 6-1 6-3 to book her spot in the second round. The 2021 quarter-finalist Jabeur served strongly and dominated from the baseline against the 125th-ranked Bjorklund to seal victory in 53 minutes. She will next meet Canadian Rebecca Marino or qualifier Katarzyna Kawa of Poland for a place in the third round.