FINA members voted 71.5 per cent in favour of the new "gender inclusion policy" 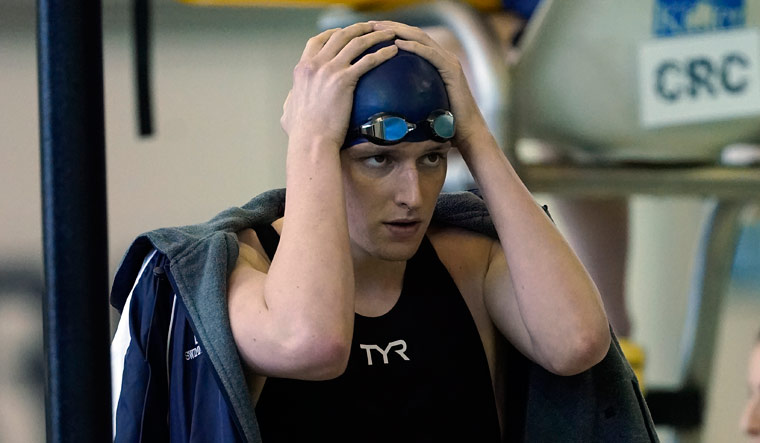 (File) In March, Lia Thomas (in picture) made history in the United States as the first transgender woman to win an NCAA swimming championship | AP

World swimming's governing body FINA, on Sunday, voted to restrict the participation of transgender athletes in elite women's competitions and create a working group to establish an 'open' category for them in some events as part of its new policy.

FINA members voted 71.5 per cent in favour of the new "gender inclusion policy" at the organisation's extraordinary general congress on Sunday. The policy only applies to eligibility for FINA competitions and events recognised by FINA. Those include world championships and the Olympic Games.

The 24-page policy also includes proposals for a new "open competition" category. FINA said it was setting up a "a new working group that will spend the next six months looking at the most effective ways to set up this new category."

The vote came after members heard presentations from of three specialist groups - an athlete group, a science and medicine group and a legal and human rights group - that had been working together to form the policy following recommendations given by the International Olympic Committee last November.

The IOC urged shifting the focus from individual testosterone levels and calling for evidence to prove when a performance advantage existed.

In March, Lia Thomas made history in the United States as the first transgender woman to win an NCAA swimming championship. She won the 500-yard freestyle.

FINA officials said the aim was to ensure fair competition in women's races. It cited scientific evidence that males who transition to being women (transgender women) retain physical advantages despite undergoing hormone therapy and testosterone reduction as part of their treatment.

The new policy states that male-to-female transgender swimmers (transgender women) are eligible to compete in women's competitions only if "they can establish to FINA's comfortable satisfaction that they have not experienced any part of male puberty beyond Tanner Stage 2 (of puberty) or before age 12, whichever is later".

What is Tanner Stage 2?

Typically boys will begin puberty at 11-12 and complete the process by 16-17. Tanner Stage 2 is the second of five stages of puberty. While puberty timetables vary according to a number of factors, boys can have completed stage 2 and entered stage 3 by the age of 12 or 13. In some cases, it may be earlier or later. Stage 2 is when physical changes begin including genital development, growth of hair around penis and under arms and an increase in height which can bring growing pains.

What is the certification process?

All athletes must certify their chromosomal sex with their national swimming federation in order to be eligible for FINA competitions. Transgender swimmers must provide FINA with a comprehensive medical history and other evidence to prove they are eligible for the competition category and be willing to undergo a physical examination. An independent expert will review the submission and make a decision on eligibility. FINA can also monitor through random or targeted testing of athlete's testosterone levels. FINA can also conduct investigations of swimmers who have not filed a declaration as a transgender athlete. Swimmers can appeal any decision to the Court of Arbitration for Sport.

What is the new 'open category'?

FINA voted to set up a working group to establish a new 'open category' that could be held alongside men's and women's races.They will look into the feasibility of a category where anyone "who meets the eligibility criteria for that event would be able to compete without regard to their sex, their legal gender, or their gender identity”.

What have LGBTQIA+ groups said?

The US-based campaign group Athlete Ally said the policy is "deeply discriminatory, harmful, unscientific" and out of line with the stance of the International Olympic Committee. "The eligibility criteria for the women's category as it is laid out in the policy police the bodies of all women, and will not be enforceable without seriously violating the privacy and human rights of any athlete looking to compete in the women's category," said Anne Lieberman, Director of Policy and Programs at Athlete Ally.

World football's governing body FIFA and World Athletics said on Monday that they are reviewing their transgender eligibility policies, after swimming passed the new rules. A FIFA spokesperson told Reuters it was in a consultation process over a new policy.

Meanwhile, World Athletics president Sebastian Coe told the BBC that the organisation's council would discuss their regulations at the end of the year. Coe praised FINA for taking the decision, which has been criticised by trans rights advocates.

FIFA said it was taking guidance from medical, legal, scientific, performance and human rights experts and also the position of the International Olympic Committee (IOC). Last year, the IOC issued a 'framework' on the issue, leaving eligibility decisions up to individual sports bodies, but adding that "until evidence determines otherwise, athletes should not be deemed to have an unfair or disproportionate competitive advantage due to their sex variations, physical appearance and/or transgender status".

Other sports, too, have also been examining their rules.

On Thursday, cycling's governing body updated its eligibility rules for transgender athletes with stricter limits that will force riders to wait longer before they can compete.

The International Cycling Union (UCI) increased the transition period on low testosterone to two years, and lowered the maximum accepted level of testosterone. The previous transition period was 12 months but the UCI said recent scientific studies show that "the awaited adaptations in muscle mass and muscle strength/power" among athletes who have made a transition from male to female takes at least two years.

(With PTI and Reuters inputs)