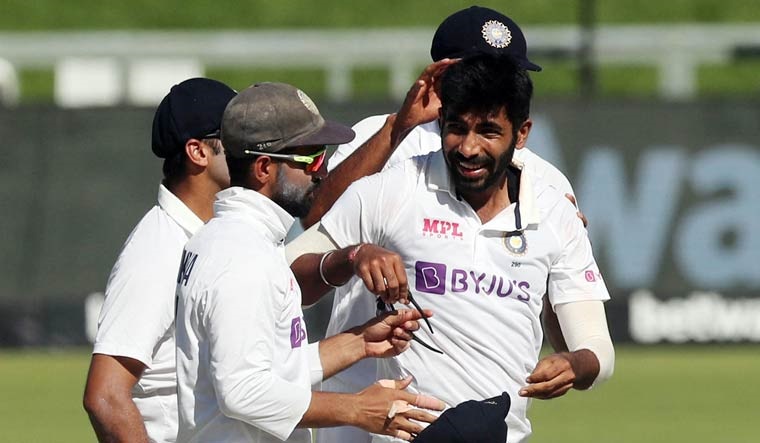 Jasprit Bumrah celebrates with teammates after dismissing Lungi Ngidi during the third Test match between India and South Africa, in Cape Town | Reuters

Jasprit Bumrah shut his critics with one of his best five-wicket hauls in the traditional format as the Indian fast bowling unit gave the team slight edge over South Africa on an exhilarating second day of the third and final Test here on Wednesday.

The lead of 13 that India managed was less about the quantum and more about the psychological advantage that they gained and despite losing Mayank Agarwal (7) and K.L. Rahul (10) cheaply, the visitors scored runs at a fair clip to reach 57 for 2 at stumps.

Skipper Virat Kohli (14 batting) and Cheteshwar Pujara (9 batting), with a cumulative experience of 194 Tests, have the responsibility of taking the team to a winning total.

And while statistics at times are of little or no relevance but Kohli wouldn't be too unhappy to know that India have never lost a Test match in which his premier strike bowler has taken a five-wicket haul.

It was a day when Kohli's captaincy acumen was worth praising as he made relevant bowling changes at the right time, juggled with subtle field placings and also took his 100th catch in Test cricket.

But someone who would be really smiling at the end of the day is Bumrah, who had a forgettable game at the Wanderers and copped a fair amount of flak for bowling too short and not depending on his strengths.

There were analytics showing how his strike-rate (wickets per deliveries) had doubled since a back injury but on Wednesday, he showed that he is skipper Kohli's real X-factor, the man who makes the difference between a good and a world-class side.

The delivery that got Aiden Markram was pitched just a shade outside off-stump and it seemed to be going straight but suddenly jagged back embarrassing the South African opener, who had shouldered arms.

On the day, Bumrah slightly altered the length making it slightly fuller on the off-stump and the off-stump channel line. The length and bounce was such that batters seemed confused about whether it would bounce above stumps or come at the stumps.

One such delivery got South Africa's best performer Keegan Petersen (72 off 166 balls) as it kicked up awkwardly from length but enough for the batter to have a jab at it and Cheteshwar Pujara accepted the offering at second slip.

But credit should also go to Shami, who in the post-lunch session, got two wickets in three balls to unsettle the Proteas after Petersen and Rassie van der Dussen (21) had added 67 for the fourth wicket.

If Umesh set up the session with a conventional outswinger that saw Van Der Dussen edging one to Kohli at second slip, Shami removed the dogged Temba Bavuma (28) and Kyle Verreynne (0) with two ideal Test match deliveries in the 56th over.

The deliveries had everything, upright seam and pitched fuller on the off-stump with just about adequate movement.

Bavuma was caught low by a diving Kohli while Rishabh Pant had a smart take to remove his opposite number.

At stroke of tea, Bumrah settled his scores with Marco Jansen sending his off-stump for a walk.

The best part of the session was skipper Kohli's adjustment when he, at second slip, decided to stand a few steps ahead of the first slip after realising that the ball was not carrying in full.

There were a couple of times when Shardul Thakur (6-1-21-0) found the outside edge of Petersen's bat but on both occasions, the ball died down in front of skipper Kohli at first slip.

The bounce available on the Newlands track isn't as steep as it was at the Centurion and the Wanderers which belongs to the Highveld region.