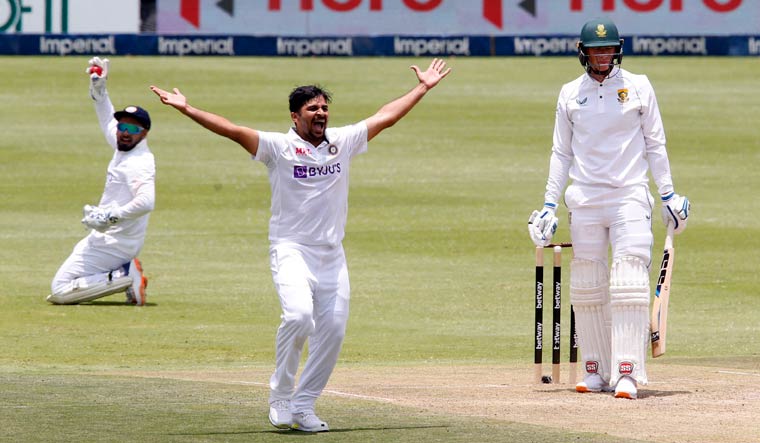 Shardul Thakur's knack of picking crucial wickets came in handy as his triple strike brought India back in the game, leaving South Africa at a jittery 102 for 4 going into lunch on day two of the second Test.

Thakur (3/8 in 4.5 overs), the fourth seamer in the side, raised his game to remove the stodgy Dean Elgar (28 off 120 balls) and young Keegan Petersen (62 off 118 balls), who looked good en route his maiden half-century in Test cricket.

Then at the stroke of lunch dismissed Rassie van Der Dussen (1 off 17 balls) to a dubious catch from wicketkeeper Rishabh Pant which seemed to have been grassed.

From 88 for 1, South Africa lost three wickets for 14 runs in the last half hour to just throw away the advantage.

Although Jasprit Bumrah (0/26 in 13 overs) and Mohammed Shami (1/33 in 14 overs) bowled their hearts out without getting desired results, Thakur's strikes at the fag end of the session was a big boost for K.L. Rahul's men.

Skipper Elgar, who looked to defend stoically at one end, had Thakur getting one to move away which took the outside edge of South African skipper's bat into Pant's gloves.

In the case of Petersen, it was a rank bad shot as the seamer got a hint of outswing but the delivery was pitched slightly short of drivable length and the half-hearted push only resulted in Mayank Agarwal taking a smart catch in the second slip.

Young Petersen, whose highest Test score till Tuesday was 19, looked in good touch having struck nine boundaries including a glorious cover drive off Shami.

Along with Elgar, he added 74 for the second wicket and a stand like this would have kept the hosts in good stead before Thakur came from nowhere to turn the match on its head.