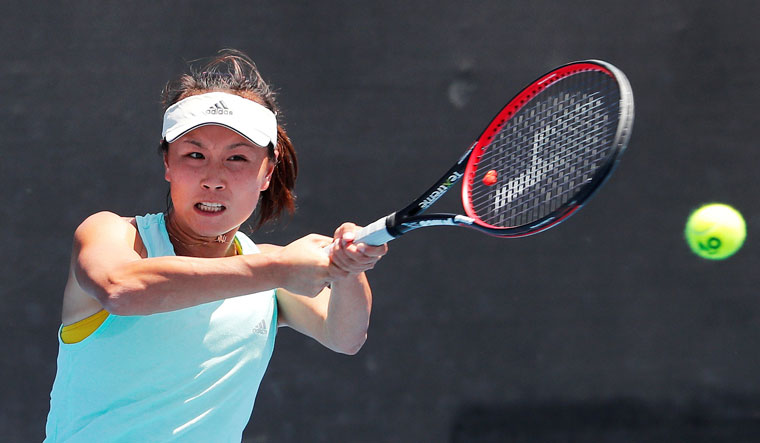 The suspension of all WTA tournaments in China because of concerns about the safety of Peng Shuai, a Grand Slam doubles champion who accused a former government official of sexual assault, could result in cancellations of those events beyond 2022, the head of the women's professional tennis tour told The Associated Press.

"We're hopeful we get to the right place, but we are prepared if it continues as it is which hasn't been productive to date that we will not be operating in the region," WTA President and CEO Steve Simon said in a video call from California.

"This is an organizational effort that is really addressing something that's about what's right and wrong".

He said the move to put a halt to the tour's play in China, including Hong Kong, came with the backing of the WTA Board of Directors, players, tournaments and sponsors.

It is the strongest public stand against China taken by a sports body and one that could cost the WTA millions of dollars.

WTA made the move to support Peng Shuai, who had accused a senior communist party leader, Zhang Gaoli of sexual assault. Post the accusation, Shuai mysteriously disappeared from the public eye but resurfaced soon after.

The WTA has asked for a “full and transparent investigation” of Shuai’s allegations.

The total value of deals between WTA and Shenzhen and other host cities is over $100 million. It is not yet clear how the WTA will get out of the contracts. Prize money in the Shenzhen deal alone came to a whopping $140 million. And the WTA is reportedly fours years into a 10-year, $120 million deal with Chinese digital streaming platform iQiyi.

WTA tournaments in China are the source of tens of millions of dollars annually. Shenzhen’s bid for the WTA Finals included a promise to double the tournament’s prize money from $7 million to $14 million annually, Yahoo reported. The prize money could be increased because Shenzhen's bid was backed by real estate developer Gemdale, who promised to build a new 12,000-seat downtown stadium. Gemdale also secured a sponsorship with Japanese beauty company Shiseido. In 2019, prize money in the WTA tournaments in China amounted to over $30 million.

China typically hosts about 10 women's tennis tournaments each year, including the prestigious season-ending WTA Finals, which are scheduled to be held there for a decade.

The nation is a source of billions of dollars in income for various sports entities based elsewhere, including the WTA, the NBA and the International Olympic Committee (IOC). Prize money in the tournaments is an indirect contributor towards the income-- the remainder of it comes from sponsorships, broadcasting rights and ticket sales, all of which depends on the location of the tournament.

Simon said the suspension, announced Wednesday via a statement from him issued by the tour, means that tournaments could still end up being staged in China if its government follows through with his requests.

If not, the events could be moved to other countries, as happened this year, when the tour's Asian swing was called off because of COVID-19 concerns; the WTA Finals, for example, were shifted to Guadalajara, Mexico, last month.

The IOC did not explain how the call was arranged, although it has worked closely with the Chinese Olympic Committee and government officials to organize the upcoming Games.

The European Union said Tuesday it wants China to offer verifiable proof that Peng is safe.

Several Chinese businesspeople, activists and ordinary people have disappeared in recent years after criticizing ruling Communist Party figures or in crackdowns on corruption or pro-democracy and labour rights campaigns.

A statement attributed to Peng two weeks and tweeted out by the international arm of Chinese state broadcaster CCTV included a retraction of her accusations.

"In good conscience, I don't see how I can ask our athletes to compete there when Peng Shuai is not allowed to communicate freely and has seemingly been pressured to contradict her allegation of sexual assault," Simon said in the release announcing the suspensions.

"Given the current state of affairs, I am also greatly concerned about the risks that all of our players and staff could face if we were to hold events in China in 2022". Billie Jean King, the WTA’s founder applauded the decision shortly after it was made. He tweeted: "The WTA is on the right side of history in supporting our players."

“If powerful people can suppress the voices of women and sweep allegations of sexual assault under the rug, then the basis on which the WTA was founded – equality for women – would suffer an immense setback. I will not and cannot let that happen to the WTA and its players.”