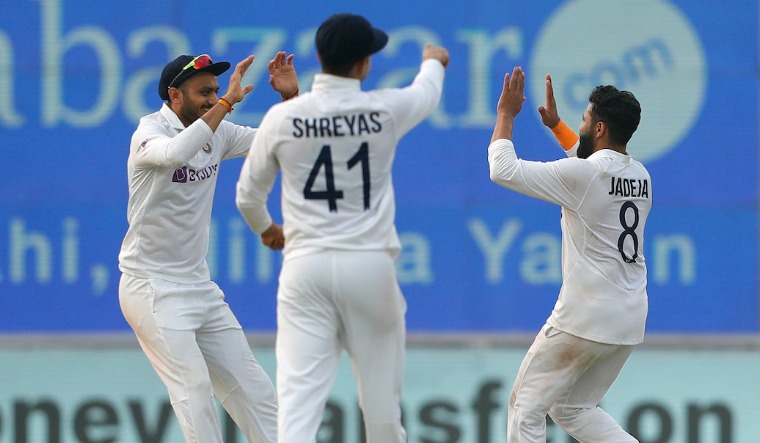 Despite Indian spinners wreaking havoc on the New Zealand batting order on day five of the Kanpur Test, the Kiwis salvaged a draw thanks to a gritty 10th wicket stand between Indian-origin players Ajaz Patel and Rachin Ravindra, who kept India at bay.

Ravindra Jadeja picked up four wickets, as Ashwin took three and Axar Patel took another one, but the visiting side finished the fifth and final day at 165/9 in pursuit of 284.

Mumbai-born Patel (2 off 23 balls) and Karnataka-born Ravindra (18 not out off 91 balls) consumed 8.4 overs after the fall of the ninth wicket to keep New Zealand on even keel in the two-match series.

A lot of credit should also go to night-watchman Will Somerville (36 off 110 balls), who played the entire fifth morning and to first raise visions of the improbable draw.

A match lasting five days on an Indian spin-friendly track impressed newly-appointed national head coach Rahul Dravid, who announced Rs 35,000 as a token of appreciation for the ground staff.

A dream start to his Test career and @ShreyasIyer15 is named the Player of the Match.✨@Paytm #TeamIndia #INDvNZ pic.twitter.com/BHbHwUz6b9

A victory target of 284 was always out of question but the gutsy New Zealanders didn't lose any wicket in the first session of the last morning before the Indian spinners, who had saved their best for the last, finally showed their skills but couldn't end on a winning note.

The result at Green Park is the first time that New Zealand has gone 10 Test matches undefeated (eight wins, two draws) with the current streak starting against India at the start of 2020.

The last half an hour was a thriller with umpires Nitin Menon and Virender Sharma checking light and Ravindra appreciating Patel for every copybook forward defensive stroke.

After this draw, there are some probing questions for the team going into the next Test.

There will be serious question marks regarding stand-in captain Ajinkya Rahane's place in the playing eleven with skipper Virat Kohli coming back in the next game.

Veteran pacer Ishant Sharma (22 wicket-less overs in the match) is looking completely off-colour since England and his place in the eleven ought to be questioned.

Tom Latham (52 off 146 balls) scored his second fifty and, along with Somerville, became the key man in taking the game deep into the fifth day.

Ashwin ended the match with six wickets as did Axar, while Jadeja took five. Axar had taken a fiver in the first innings.

Ashwin in his 80th Test, crossed Harbhajan Singh (417 in 103 games) to become the third-highest wicket-taker for India in the five-day format.

Debutant Shreyas Iyer, who scored a century in the first innings and a fifty in the second, was adjudged man of the match.

The second Test will be played on December 3 at the Wankhede Stadium in Mumbai.