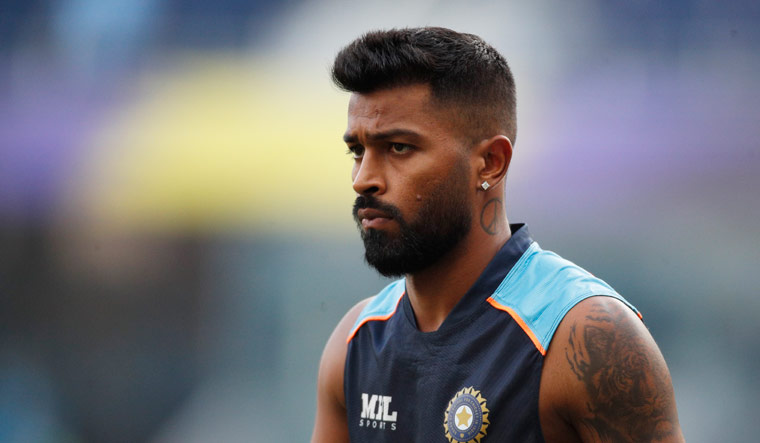 India all-rounder Hardik Pandya's shoulder injury sustained during the T20 World Cup opener against Pakistan is believed to be a minor one and he is likely to be available for the next game against New Zealand on October 31.

Pandya, who did not bowl in the IPL last month, is playing only as a batter right now and scored 11 off 8 balls on Sunday night, looking distinctly uncomfortable against pacers before being hit on the shoulder by a short ball.

"Yes, Hardik's scan reports have come and the injury is not very serious. Also, the fact that there is a six-day gap between two games gives him enough time to recuperate," said a senior BCCI official on conditions of anonymity.

"But obviously, the medical team would wait and watch as to how he shapes up during the training sessions," he added.

Pandya had recently said that he would be bowling during the knockout stages but India's chances hinge on the New Zealand game. Losing the match would seriously jeopardise their prospects of going ahead in the tournament.

The games against Scotland, Namibia and Afghanistan are expected to be easy wins for India, Pakistan and New Zealand.

Therefore, if India lose to New Zealand, it will hamper their chances of making it to the top two in the group.

In fact, there are questions being raised about earlier assertions by the chairman of selectors Chetan Sharma that Pandya would bowl in the IPL to gear up for the World Cup.

He didn't bowl an over and the communication on Pandya's fitness status between the team management and selectors seems baffling at this time.

There have been conflicting reports about when he would start bowling.

Before the Pakistan game, the player said that he would perhaps bowl in the knock-outs but the statement did not look convincing.