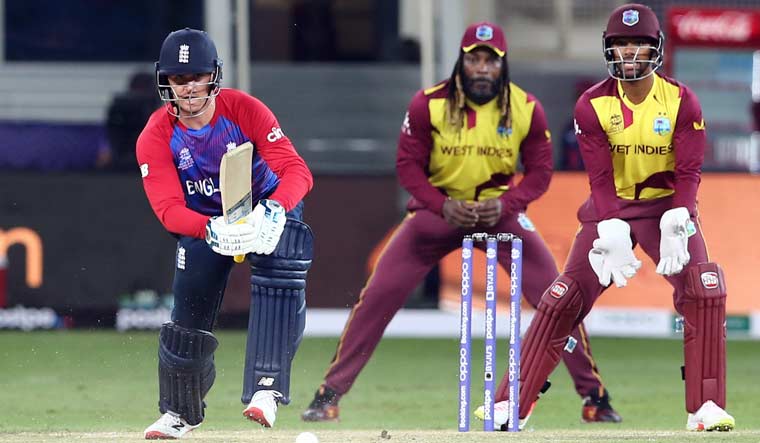 It was expected to be an exciting battle between the West Indies' flair and a capable England attack but was reduced to a no-contest following a horrendous batting display by the defending champions, who were skittled out for just 55 runs in inside 15 overs.

The West Indies batters only looked for big shots and that became their undoing as they seemed to have forgotten that rotating the strike was important when boundaries were difficult to come by.

England bowlers were persistent with their line and length and were rewarded as West Indies managed their second-lowest T20 total after 45 they made against the same opponents in 2019.

It was also the third-lowest total in T20 World Cup behind 39 and 44 (both by the Netherlands).

England knocked off the required runs in 8.2 overs but not before they too lost wickets in the cluster.

Jason Roy (11), Jonny Bairstow (9), Moeen Ali (3) and Liam Livingstone (1) struggled to adjust to the slowness of the wicket that had made stroke-making quite difficult.

Left-arm spinner Akeal Hosein (2/24) made a good impression with his quick balls and excellent fielding.

Jos Buttler (24 not out) and skipper Eoin Morgan (7 not out) saw England through and ensured there was no more drama in the contest.

Such results do make a difference if the net-run rate comes into play at the later stage of the tournament.

Earlier, Rashid gave away just two runs in the 14 balls he bowled and wiped off the middle and lower order, carrying forward the good start Moeen had provided after Eoin Morgan invited the Caribbeans to bat.

Moeen ended his spell in a splendid manner, bowling as many as 18 dot balls in his four overs while conceding just 17 runs.

West Indies batters kept looking for boundaries and they fell by the wayside one after another.

Chris Gayle (13) was the only batter who got to the double digits.

Moeen was involved in a terrific battle with the West Indies batters after he opened the attack.

Lendl Simmons (3) and Shimron Hetmyer opened their arms against him but the off-spinner succeeded in sending them back to the dug out.

Chris Woakes, on the other end, bowled a tight spell and also got rid of Evin Lewis (6) while Tymal Mills saw the back of dangerous Gayle, who hit three shots to the fence but could not execute the big shot off the pacer.

But none, including skipper Kieron Pollard, showed patience that was required to stay on the dry wicket that was offering some assistance to the spinners.