England will have just one bowler, Mark Wood, who can consistently bowl 90mph 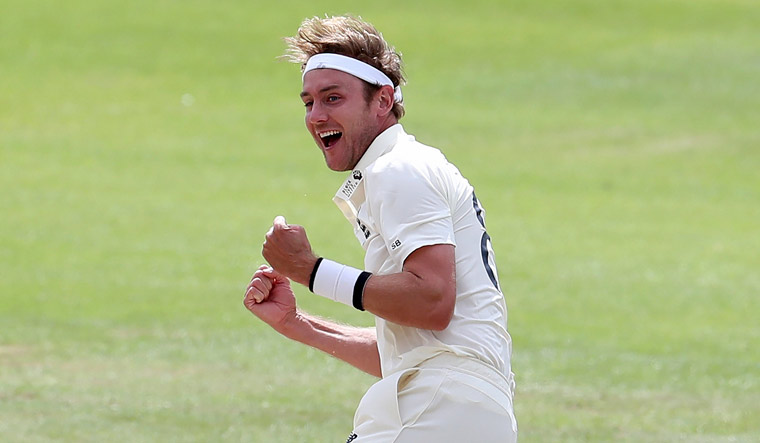 England fast bowler Stuart Broad says it won't be express pace but creating relentless pressure that will hold the key for his side in the Ashes tour in Australia later this year.

Premier pacer Jofra Archer has been ruled out of the tour due to an elbow injury while England will also be without Olly Stone, who has been troubled by a back issue.

It means veteran James Anderson will lead the attack, which will have just one bowler who can consistently bowl 90mph—Mark Wood.

Broad, who was included in coach Chris Silverwood's 17-member squad for the Ashes due to begin in Brisbane on December 8 after recovering from a calf injury, said England has a Plan B and it should work for them against Australia. ''I've been doing quite a bit of research and looking at every right-arm over the wicket to right-handers and every right-arm round wicket to lefthanders that's fallen in Australia in the last six years,'' Broad was quoted as saying by The Telegraph.

"We often, in England, talk about express pace, but that's not what I'm seeing. It's relentlessness with the ball. It's (Glenn) McGrath-like that you do for a long period. It's not bowling bad balls and releasing the pressure. Kyle Abbott and (Vernon) Philander (South African seamers) have got brilliant records there. It's bringing the stumps into play and, as a whole bowling unit, repeating it, repeating it and repeating it for long periods. That's how you get success in Australia. So I'm not too worried.'' He said it would be great to have Archer in Australia and have that express pace, but his side's bowlers would need to move the ball and be relentless. ''That's what we've got to aim to do.'' The tour later this year will be Broad's fourth Ashes trip to Australia and barring the success of the 2010-11 series, the 35-year-old fast bowler has not got many happy memories. Broad has not played since picking up a calf tear after the first Test against India but insisted lack of enough competitive cricket won't be an issue.

''It was a bad calf tear, but it was a clean one. When I did it, I knew it was pretty bad news... I couldn't even get a cup of tea. I was just lying on the sofa watching the cricket. It took me at least two weeks to be able to put any sort of weight through my foot,'' he said.

''I've been back bowling for two weeks now. This Ashes series, there's going to be a lot of players searching for a bit of match hardness and match readiness,'' said Broad who has taken 524 wickets from 149 Tests since making his debut in 2007.

''I feel like I'm approaching the series fit, fresh and ready to hit the ground running. I'm not at 100 per cent yet but I don't need to be. I'm building my body up slowly and gradually.''