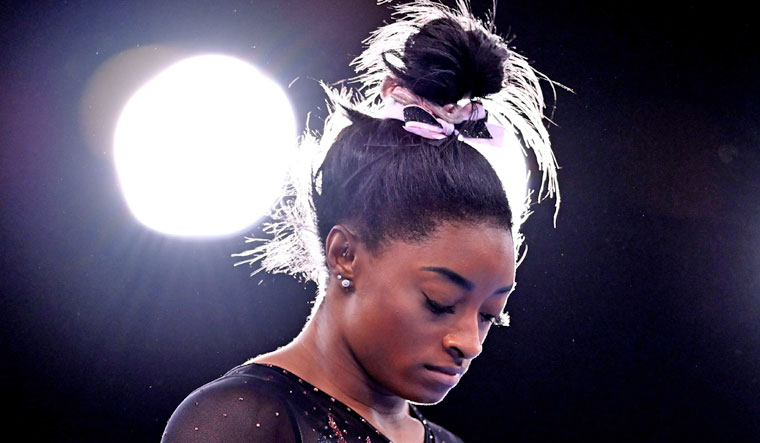 Simone Biles of the United States during training | Reuters

Hours after Japanese Tennis star Naomi Osaka lost in the third round of the singles competition and cited her mental health to be the reason for her loss, US gymnast Simone Biles dropped out of the Tokyo 2020 team gymnastics final, saying mental health is more important than sports.

Support came pouring in for Biles on social media. Actor Priyanka Chopra Jonas shared an old interview with the gold medallist on Instagram and wrote in the caption, “Role model, Champion… @simonebiles I had the joy of getting to know @simonebiles a few years ago, and she blew me away then with her vulnerability and self awareness. Simone, yesterday we were reminded why you are truly the GOAT, and why nothing supersedes taking care of ourselves…body AND mind. I cannot fathom the impossible pressure you all perform under, but knowing where you need to draw the line and step away - TO CHOOSE YOURSELF - is most important. Only when we are okay can we perform at our best, and enjoy doing so."

In the interview for YouTube Originals Special, If I Could Tell You Just One Thing, Chopra asks Biles about 'the expectation of always kind of being perfect'. Simone replied, "I feel like that's the hardest part of my career. I don't want to say job because I chose to do it, but I feel like always meeting people's needs, every single day, all the time is probably the hardest thing that I go through." Chopra then asked her if it crushes her when she fails to meet the expectations and pressure. Biles replied, “Yes. I feel like if I don’t meet their needs and I failed. Even at the Olympics everybody wanted me to win six golds or this or that and I didn’t meet those needs and I was really down on myself especially after the beam. Even though I still medalled, everyone was like, ‘Well, what the heck is a bronze?’."

Musician Justin Beiber took to Instagram. He wrote: “Nobody will ever understand the pressures you face! I know we don’t know each other but I’m so proud of the decision to withdraw. It’s as simple as - what does it mean to gain the whole world but forfeit your soul.

Sometimes our no’s are more powerful than our yes’s. When what you normally love starts to steal your joy it’s important we take a step back to evaluate why. People thought I was crazy for not finishing the purpose tour but it was the best thing I could have done for my mental health!! So proud of you @simonebiles.”

Beiber, in the post, refers to cutting short the tour promoting his album, 'Purpose'. Beiber was scheduled to finish a 54-country tour to promote his album 'Purpose' in 2016. the singer after performing at 150 concerts in 40 countries, cancelled concerts at the last 14 countries and said, “just resting, getting some relaxation,” on an Instagram post. He wrote, “I’ve learned the more you appreciate your calling the more you want to protect your calling. Me taking this time right now is me saying I want to be SUSTAINABLE... so that I can be the man I want to be, the husband I eventually want to be, and the father I want to be.”

Chennai-based Clinical Psychologist and Assistant Professor of Psychology at Government Chengalpattu Medical College Nithya HM said, “Biles' is a courageous and commendable decision amidst the prestigious and competitive Olympics event to give priority to mental health rather than succumbing to pressure.”

Four-times Olympic gold medallist Biles said, 'They (her teammates) saw it a little bit in practice. I was having a little bit of the twisties."

"She was giving us a little heart attack," teammate Jordan Chiles said. The gymnast was expected to match, if not surpass the all-time women's gymnastics record of nine Olympic golds. While performing a back handspring onto the vault then two-and-a-half twists in mid-air with a blind landing facing away from the apparatus-- definitely not an act for the faint-hearted.

'Could happen to anyone'

Dr Harsha Haridas, a psychiatrist at Koyili Hospital in Kannur says, “Simone Biles has so elegantly explained what it means to be under pressure, the anxiety of having to perform to the expectations of others, of a whole country. Anxiety can often be crippling Contrary to what people think, the mind and body are most certainly related and needs to be in sync for a spectacular performance. It shows great courage on her part that she chose to give up what was probably a life-long dream and years of training. It has been a hard year for all of us mentally and physically. Why should we expect athletes to be any different?”

“It could happen to any of us while we are going for a performance, a talk or a meeting. Most times, figuring out that there's a problem early on and getting help for it is one way to do something as a precautionary measure,” Haridas adds.

Biles' teammates stepped up and they eventually cinched a silver. Biles also spoke in support of Osaka, who had said, she had felt the weight of expectations. “I've taken long breaks before and I've managed to do well,” Osaka told Reuters. Biles, while announcing her decision to step back cited Osaka as an inspiration and said she thought it was good to be talking about mental health in sports, a Reuters report reads.

Coming to Biles' support, "You have absolutely no control over your body and what it does," US gymnast Aleah Finnegan wrote on Twitter.

British gymnast Claudia Fragapane, who fell off a beam at the Rio Olympics told BBC, “Everyone thinks that she is just going to be absolutely out of this world and perfect and she's not human; but actually she is human, and I think the pressure just got too much."

Delhi-based clinical psychologist at Ram Manohar Lohia Hospital Dr Prerna Sharma said, “One must not do things for the sake of competition or proving to the world. This could create anxiety and what we call dissonance in psychology.” Sharma went on to say that this necessarily doesn't mean that a person has an underlying mental health issue. “It's a matter of protecting one's wellbeing by taking a call on what is best for us as a choice in the current time,” she said.

Jenisha Shah, senior psychologist and outreach associate at Mpower- The Centre, Mumbai, says, “It is okay to not be okay and having to take a break. In a way to avoid a breakdown one can learn to identify the stress triggers, building more awareness of one's emotions, listening to their gut and body and creating healthy boundaries by saying 'no' when needed. Perseverance is admirable but putting oneself through undue pressure leading to a mental breakdown is impertinent to ourselves.”