Wimbledon 2021: Shapovalov, Korda and other 'young gentlemen' who turned heads 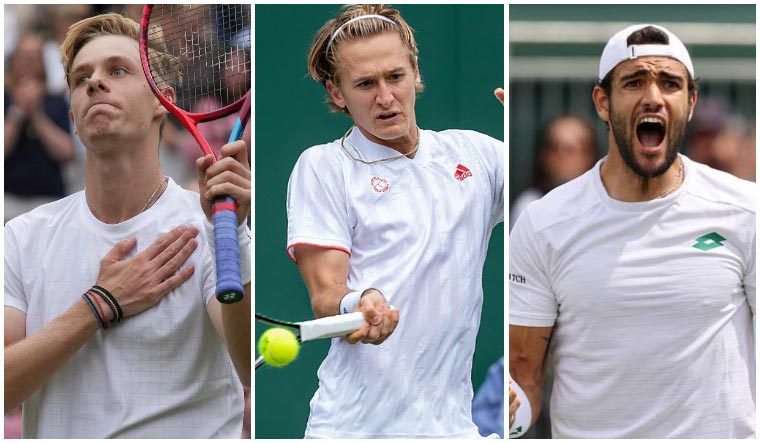 There were no surprises on who had his hands on the Wimbledon 2021 trophy. It was one of the Big 4 yet again – Novak Djokovic. The quartet of Djokovic, Roger Federer, Rafael Nadal and Andy Murray have made the grass their own over the past 18 years (there was no tournament in 2020 because of the COVID-19 pandemic).

Berrettini raised hopes of an unlikely upset by winning the opening set, but Djokovic's experience and big-match temperament came to the fore as the match progressed. Nevertheless, the Italian, playing in his first Grand Slam final, earned the respect of tennis great Boris Becker, who he almost emulated by becoming the first player since Becker in 1985 to win the prestigious Queen's Club tournament on debut and add the Wimbledon crown, too, the same year. “It is not the end, it is the beginning for me,” Berrettini sounded off a warning for his opponents after the final. He has set his sights on becoming Italy’s first Grand Slam male winner since Adriano Panatta at the 1976 French Open. He came close earlier in 2019, when he reached the semifinal at the US Open.

Emotions seemed to have got the better of him in the semifinal against Federer-slayer Hubert Hurkacz, but he held his nerves to win 6-3, 6-0, 6-7, 6-4. The latter lost the match but won the hearts with his fight at his first semifinal at a major. The 24-year-old Hurkacz, who defeated Federer in straight sets in the quarterfinals, became only the second Polish man to reach a Slam semifinal. En route to the Wimbledon semifinal, the Pole also defeated now world no. 2 Daniil Medvedev of Russia. Interestingly, he had beaten seventh seed Berrettini in straight sets in their only previous meeting on the ATP Tour on the hard courts of Miami in 2019. But grass proved to be a different ball-game.

In the other semifinal, the world no. 1, Djokovic, was stretched by yet another young star, Denis Shapovalov, seeded 10. The 22-year-old went down fighting 6-7, 5-7, 5-7 but impressed everybody, including Djokovic, who admitted being outplayed by Shapovalov at times in the match.

Before this year, Shapovalov had played only won one match at Wimbledon and his best Grand Slam performance was a quarterfinal appearance at the US Open last year.

He was introduced to the game early as his mother was a tennis coach. 2016 proved to be the turning point for Shapovalov – as a wildcard entry at the Rogers Cup, he knocked out then world no. 19 Nick Kyrgios. His ranking, which was beyond 1,000, improved and entered the top 250. The same year, he lifted the boy's singles Wimbledon title, beating another young sensation Stefanos Tsitsipas along the way.

Khachanov, who has won four ATP singles titles and reached the quarterfinals of the 2019 French Open, put up quite a fight but Shapovalov prevailed. The match had its share of drama, after Khachanov was asked to change his white cap as it had, hold your breath, too much black on the inside!

But one of the defining moments of the Wimbledon this year was Khachanov's fourth-round win over the sensational debutant Sebastian Korda. The five-set thriller set a record for most breaks of serve in a set. The marathon 81-minute final set saw 13 breaks of serve before Khachanov finally won 3-6, 6-4, 6-3, 5-7, 10-8. The 21-year-old Korda was one of the finds of the tournament, making it to the last 16 in just the fourth Grand Slam main draw of his career. He is the son of professional tennis players Petra Korda - the 1998 Australian Open champion - and Regina Rajchrtova and brother of Nelly and Jessica, both professional golfers. And if that wasn't enough, Korda junior has none other than Andre Agassi as his 'mentor'. He has been in good form lately, beat Roberto Bautista Agut and Kei Nishikori en route to the Halle quarterfinals.

This young brigade hogged the limelight at the Wimbledon this year. With Federer, Nadal and Murray nursing injuries now and then, this bunch, along with Medvedev, Tsitsipas and Alexander Zverev, will be snapping at the heels of Djokovic and the other veterans in the coming years, for their place in the sun, be it on grass, clay or hard courts.